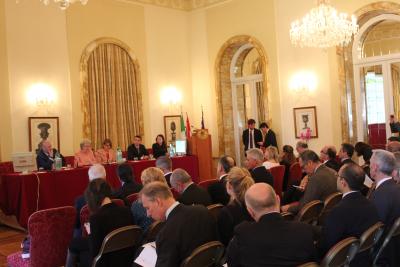 ROME – A number of senior diplomats, advisors, scientists and business figures assembled at the Villa Wolkonsky in Rome on Friday for a conference jointly hosted by the UK and Canadian embassies, concentrating on new approaches to the fight on climate change, with the audience being urged to embrace smarter attitudes to the crisis.

Stefano Marguccio, Diplomatic Advisor to Italy’s Environment Minister, captured many of the themes presented of "The Global Fight against Climate Change" by turning to classical literature and stressing that those combatting climate change must turn away from the approach of the Odyssey’s Cassandra, cursed to utter true prophecies that no one believes, and to embrace the tactics and methods of the wily Ulysses.

That will be a challenge in the present diplomatic situation, with America’s withdrawal from the Paris agreement threatening the planet’s future. Stéphane Dion, Canada’s Ambassador to Germany and Special Envoy to the European Union and Europe told the audience that, on our present trajectory, “we are in trouble.”

His presentation discussed the limitations of efforts to curb pollution, against the need for a strong economy, before highlighting Canada’s current “Clean Growth Plan” that is planning to slash the country’s emissions by nearly two percent a year.

Nonetheless, the two hosts of the conference, the UK’s Ambassador to Italy, Jill Morris, and her Canadian counterpart, Alexandra Bugailiskis, were keen to stress that 2018 was a crucial year of global initiatives.

Later in year, Canada will play host to the G7. Ambassador Bugailiskis announced that the upcoming Canadian meeting would look to “accelerate action” on the climate, and place an emphasis on the importance of gender and the inclusion of women in the fight against climate change.

Emma Bonino, Italy’s renowned senator who led the fight against Italy’s abortion laws, will be Italy’s representative on a special panel to address gender at the upcoming meeting.

The UK, likewise, will bring together Commonwealth heads of state in London. Nick Bridge, the UK’s Special Envoy for Climate Change, stressed that the term “Commonwealth takes on a new meaning” with the present threat to the environment, requiring more concerted global action and a “second industrial revolution.”

“The faculties of our present universities were set up in the nineteenth century,” he argued, “in a way that is no longer adequate.” Tackling climate change, he stressed, would require “putting together knowledge from all different areas.”

These early talks were followed by two further panels, focusing on “Sustainable Finance” and the role that businesses can play in tackling the climate.

According to the World Bank, dlrs 94 trillion of investment will be needed to finance the world’s coming infrastructure needs to 2040. Nick Bridge underlined that it was imperative that this financing be used to create green and sustainable development.

The two panellists on sustainable finance detailed a number of potential avenues for improvement. Céline Bak, an Affiliate of the International Institute of Sustainable Development and President of Analytica Advisors, used her position outside of government circles to stress the need to remove subsidies on fossil fuels by the year 2020.

Environmental trade, she noted, was twice the size of the automotive industry and three times that of aerospace, making it a significant opportunity for growth.

Aldo Ravazzi, Chief Economist, Italian Environment Ministry spelled out Italy’s role as host of the G7 in driving the green financing agenda, pointing to the tax exemptions on the shipping and aviation industries that could be removed.

In the final session, representatives from the business world gave their take on improvements to be made. Stefania Omassoli, Director for Business Development at the Carbon Trust highlighted the work of her organisation in facilitating UK businesses to reduce their carbon footprint.

Similarly, the Head of Institutional Affairs at Enel Green Power and Vice President of Confindustria Assafrica and Mediterranean, Ruggero Arico, stressed the necessity of including the developing world in conversations on emissions reductions.

In the meantime, Ron Dizy, Managing Director of the MarRS District Advanced Energy Centre in Toronto, emphasised that while technological innovation was the “thin edge of the wedge” in producing solutions to the current crisis, governments also needed to do more to facilitate the “adoption” of already existing improvements.

After productive series of discussions with probing questions from the audience, guests at Villa Wolkonsky were treated to lunch by the Commonwealth Club.

Indeed, the club’s band, assembled from musicians from around the world, brought its own take to the spirit of international collaboration, treating guests to a performance in Rome’s spring sunshine. 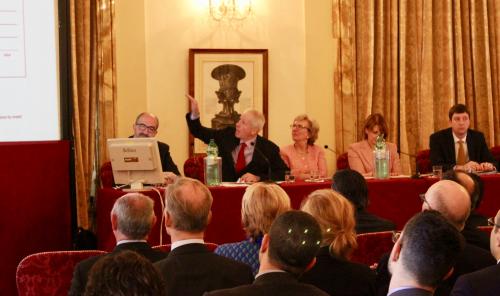