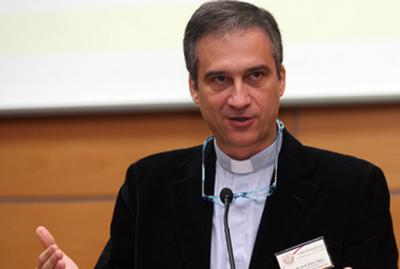 VATICAN CITY – It was revealed on Wednesday that the Vatican’s head of the Secretariat for Communication, Monseigneur Dario Edoardo Viganò, had resigned following the furore surrounding the omission of parts of a letter from Pope Emeritus Benedict XVI in support of Pope Francis.

The current pontiff has been forced to accept Viganò’s exit, following the shambolic mishandling of the Benedict’s letter that accompanied the publication of the “Theology of Pope Francis.”

The former pope wrote that he hoped the volumes would help to put to bed the idea that “Pope Francis would only be a practical man devoid of particular theological or philosophical formation, whilst I was only a theorician of theology that little understood the concrete life of Christian today.”

At the time, the letter was seen as a broadside against some of Pope Francis’s more conservative critics, who look to the former pope as a bastion of the Church’s values.

Nonetheless, in the days after the event, it was revealed that parts of Benedict’s letter had been omitted by Mons Vignanò who came in for a volley of criticism

Mons Vignanò’s letter of resignation was dated on Monday, however, the news was only announced on Wednesday, alongside the publication of the entirety of Benedict’s letter.

The uncensored version sees Benedict criticising the inclusion of one theologian in particular. “Only in the margin,” Benedict wrote, “I would like to note my surprise for the fact that amongst the authors featured [in the volumes of Pope Francis’s Theology] is also Professor Hunermann, that was brought to light during my pontificate, for having headed anti-papal initiatives.”

“He participated to a significant extent in the release of the ‘Kollner Erklarung, that, in relation to the encyclical ‘Veritatis splendour.’ Attacked ina virulent mode the magisterial authority of the pope, especially on questions of moral theology,” the letter continues.

Benedict also suggested the Professor Hunerman had founded a theology centre that was initially anti-papal in nature.

Whilst resigning, Mons Vignanò addressed Pope Francis, arguing that “in these last days many polemics were raised surrounding my work that, despite the intentions, destabilised the complex and great work of reform that You had entrusted in me.”