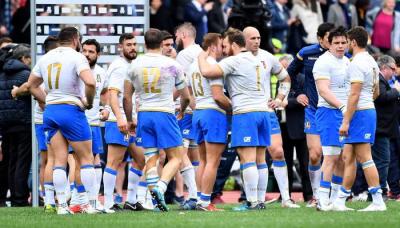 Italy started the game brightly with Tomasso Allen converting a penalty to open his account in a hugely impressive performance from the former Scotland U20 fly-half.

Scotland’s response was swift, albeit untidy. Finn Russell burst through a gaping hole in the Italian defence but was clawed down a couple of metres short. Scrambling to avoid what appeared an inevitable score, the Italians were able to briefly slow down the Scots’ attack before Hamish Watson’s bobbled pass was scooped up by hooker, Fraser Brown, for the opening try.

Italy’s 12 tries throughout the tournament, more than Scotland and France, shows an attacking flair isn’t missing. It was the lively Allen whose quick feet cut back inside Huw Jones to restore Italy’s lead.

From scorer to provider, Allen one again spotted space in behind the defence, stabbing through a perfectly weighted kick which full-back Matteo Minozzi gleefully gathered as he dived over the line for his fourth try in as many games.

A powerful Scotland maul reacted to the growing Italian cushion as captain, John Barclay, waited patiently at the rear. He eventually crashed over the line for a try which was converted by Greg Laidlaw for the final score of the half.

A frustrated-looking Scotland were expected to come back out of the blocks sharply, but again it was Italy who began on the front foot. A Sebastian Negri try was ruled out before Jake Polledri brushed off a feeble tackle by Ryan Wilson to set up Allen for his second.

The introduction of Ali Price brought freshness to the Scotland attack and it wasn’t long before they were back within touching distance. Laidlaw lofted a pass over to Sean Maitland who finished sharply as the Scots began to eat away at the Italian lead.

Stuart Hogg’s 71st minute try followed, changing the lead as the Italians appeared to be fading, but on a mistake-ridden day, Allen was presented with another opportunity. The fly-half confidently booted over a 40-metre penalty to move his side one point ahead.

The bruising encounter, however, was set up for one final, dramatic twist. Laidlaw took the responsibility in the last minute to edge his penalty just inside the left post as Scotland dealt a cruel blow to their Italian hosts.

A much-improved display but an all too familiar outcome. Italy have much to learn from this Scotland side, with whom they used to battle out the scrap to avoid the wooden spoon.

The players and supporters are left to suffer the weekend’s pain, but coach, Conor O’Shea, stressed at the final whistle that sparks and individual performances throughout the tournament provide reason to be optimistic, despite a painful conclusion.