Roma ‘among the best eight in Europe’ 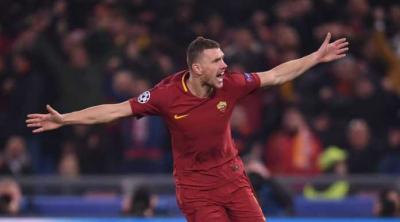 ROME – Edin Dzeko fired AS Roma into their first Champions League quarter finals in ten years as the Italian side crept past Shakhtar Donetsk on away goals with a 1-0 victory at the Stadio Olimpico.

The hosts began brightly, opening their shot account inside the first 25 seconds as Radja Nainggolan set up the busy Edin Dzeko whose attempt signalled the intent of Eusebio di Francesco’s side.

With the tie still poised marginally in Shaktar’s favour, the Ukranian champions had the chance to extend their slender aggregate lead as Facundo Ferreyra caught Federico Fazio dithering on the ball. However, the Argentinian was just about able to recover, flustering his fellow countryman as he raced through on goal, saving his own blushes and potentially the tie.

The pivotal moment soon followed as an enticing blind pass from Kevin Strooman drew out Shaktar keeper, Andriy Pyatov, who was beaten to the ball by Dzeko. Stranded well off his line, the Bosnian forward brilliantly stabbed home the decisive goal, squeezing his shot through Pyatov’s legs.

Dzeko, however, could have somewhat eased the tension around the Stadio Olimpico as he once again had Pyatov well-beaten, but his effort narrowly missed the left-hand upright. Yet, the game didn’t end without drama; Dzeko once again found himself in behind the Shaktar defence, outpacing the fatigued figure of Ivan Ordets, who swiftly brought down the Roma forward and left referee, Alberto Undiano Mallenco, with no choice but to brandish a straight red.

At the final whistle the visitors had failed to even register a single shot on target as manager, Paulo Fonseca, lamented wasted chances the kill off the tie in the first leg.

Roma’s result reemphasises the recent positivity surrounding Italian football as the Giallorossi join Juventus in the quarter finals – the first time in 11 years that two Italian sides have simultaneously made it to this stage of Europe’s elite competition. The draw is set to take place on Friday 16th March.