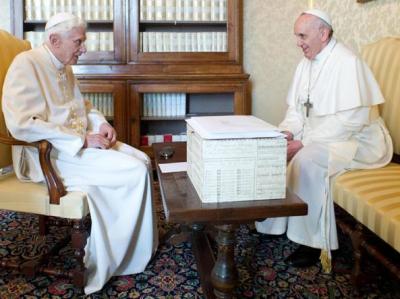 In a surprising move, Benedict penned a letter in defence of his successor, detailed in Corriere della Sera, arguing that he supports the “initiative that wants to oppose and react to the obtuse prejudice” towards the current pontiff.

Benedict explicitly stated that he objected to the identification of Pope Francis as “only a practical man devoid of any theological or philosophical training, while I was allegedly only a theorist of theology who understood little of the concrete lives of today's Christians.”

The move came as part of the presentation of a two volume edition of “The Theology of Pope Francis,” that Benedict argued “demonstrated that Pope Francis is a is a man of profound philosophical and theological training.”

Nonetheless, the pope emeritus did state that while it helped to show “continuity” between the two reigns, there were “differences of style and temperament.”

Corriere argued that the move is part of an effort by Pope Francis to mobilise support to his cause, using the former occupant of his position as a “bulwark” against his detractors.

Pope Francis’s election was viewed by some as a defiant rejection of the approach of the Pope Benedict who was considered isolated from the Catholic faithful and struggled to handle the crises enveloping the Vatican under his tenure.

Nonetheless, there are still those who are said to be loyal to the former pope and, more particularly, to his style of leading the church. These clashes of conservative and reformist came to a head in 2017 when Pope Francis removed Cardinal Gerhard Muller from a position overseeing doctrine. Beneduct had been one of the chief promoters of Muller during his pontificate.