How to see Florence without falling into tourist traps 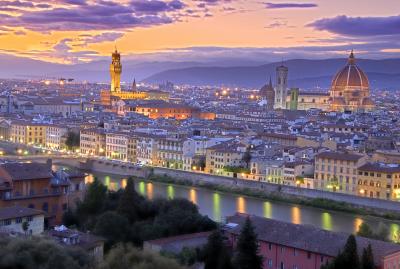 FLORENCE -- The capital of Tuscany amongst many attractions, is distinguished by its embodiment of Renaissance architecture, beauty and art. It is this that attracts the swarms of eagerly awaiting tourists to the elfin city.

As a non-native Florentine, I can assure you that the famous historical sites such as the Duomo, Ponte Vecchio, Palazzo Pitti and Medici Chapel are nothing short of astounding and very much worth the visit. However, if you are returning or wondering if another trip to Firenze is justifiable there is far more to explore than solely these obvious but nonetheless breathtaking sites.

Follow the road along the river and ascend up, up and up into the hills and winding roads that lead out to treasures like San Miniato al Monte or the small hollow of Fiesole where markets on every first Sunday of the month await the cheese and meat lovers amongst you. San Miniato al Monte is over 1,000 years old and buried in the next door cemetery is the creator, Carlo Collodi, of everyone’s favourite wooden puppet, Pinocchio.

For urban trekking enthusiasts begin in San Niccolo to soak up true Italian atmosphere. Starting at the Torre di San Niccolo walk all 160 steps to witness the panoramic city view. Take a slight detour to the Rose Garden which although is constantly growing in popularity, remains still an oasis of Zen away from the city hustle.

Check out the Rampa dei Bastioni where the stairs near Via dei Bastioni combined with the incline on the steep Viale Michelangelo make for a decent workout. With stunning villas and houses peeping out from behind the leafy streets towards Piazzale Michealangelo and Poggio Imperiale, don't forget your camera!

Don’t miss the routes along the charming Costa di San Giorgio towards the Forte del Belvedere which emulates an English countryside feel or the streets of Palazzo Pitti and Santo Spirito, home to some of the most famous artisan shops in Florence.

Cinephiles who have watched ‘A room with a view’ revisit the meandering path to Villa de Maiano where Lucy and George shared their first kiss. Even if movies aren’t for you the villa itself is rich in history- after being owned by the powerful Florentine noble family- Pazzi, Sir John Temple Leader, the English politician, purchased the property in 1850. He hired the architect Felice Francolini to restore it to its former glory which he carried out very convincingly. Also a popular venue for weddings the property oozes magnificence.

Have a wonder through Mercato Sant’Ambrogio and Mercato San Lorenzo to purchase fresh produce or go straight to the food hall where experienced locals cook a variety of dishes for a fraction of the price.

Due to the emphasis on tourism the cuisine here is naturally of a high quality but if you want to taste exceptionality stray away from the exclusive and inviting glass windows near the cathedral.

Take a stroll over the river to the Oltrarno where authenticity and vivacity await you. A meeting point for Florentines and savvy tourists alike, the ‘other side’ of the river is flooded with economical and distinctive concepts. Home cooking and a modern panache combine to fill la gente with a memorable meal.

I live near the Cathedral myself and when I don’t quite fancy the 15-minute walk that finds me in the Centre of Piazza Santo Spirito there are many outstanding spots nearby. Don’t be afraid to get lost in the small cobbled back streets that stray away from the map.

Hidden from the main routes it will be hard to conceal that smug smile after you realise you have found something special. A small Trattoria/ Osteria or restaurant bursting at the seams with natives and travellers all united with the goal of good, local food.

Here I have a small list of eateries I particularly enjoy but do lose your way within the labyrinth maze of Firenze and add to this with your own hidden gems. There is enough to go around and more!