Milan left with mountain to climb after Arsenal defeat 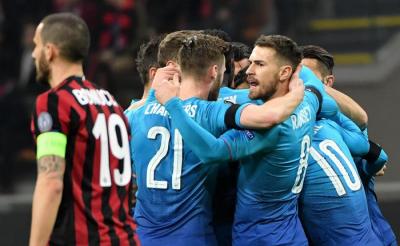 ROME – AC Milan suffered a first loss since Dec last year in a 2-0 defeat to Arsenal at the San Siro. Goals from Henrikh Mkhitaryan and Aaron Ramsey put the Gunners in a commanding position for the decisive leg in London.

Arsenal, widely criticised this season under the waning figure of Arsene Wenger, responded “like a boxer”, according to their manager, who is undoubtedly suffering one of the worst moments of his managerial reign, following a series of bitterly poor performances.

A minute’s silence was impeccably observed at the San Siro in memory of the late Fiorentina captain, Davide Astori.

Eager to reiterate the team’s transformation under Gennaro Gattuso, the Rossoneri burst out the traps in front of the lively home support in the opening moments of the game. However, from a Milan perspective, this momentary phase was to be the highlight of a disappointing night at the San Siro.

Moving on from their “nightmare week” and attempting to avoid a fifth successive defeat, the Gunners’ swiftly responded to the early Milan pressure, settling into a rhythm. They began to cause problems for the hosts as Mkhitaryan opened the scoring inside 15 minutes with his first goal for the club since his transfer from Manchester United. The Armenian international should have doubled his tally later in the half but was denied by the crossbar having beaten Gianluigi Donnarumma.

Özil once again was the architect of the following goal. An exquisite pass showcased the German at his best, slicing apart the Milan defence to feed Ramsey through on goal. The Welshman rounded Donnarumma, practically walking the ball into the back of the net to give Arsenal a valuable two goal lead.

“Spineless” while lacking “fight and determination” in their previous games; the travelling Arsenal fans will certainly be somewhat reassured after a much more convincing display. For Milan though, there remains plenty to play for in the away leg. However, a much-improved performance will be required to take advantage of Arsenal’s ever-present fragilities and succeed in the coming test at the Emirates.