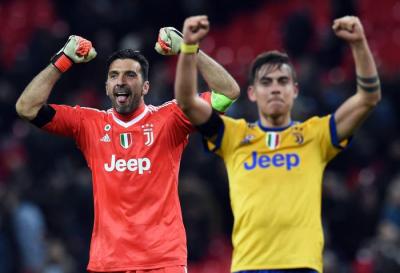 ROME – In a pulsating tie, Juventus came from behind against Spurs to snatch a 2-1 victory at Wembley, progressing into the quarter-finals of the Champions League. Goals from Gonzalo Higuain and Paulo Dybala cancelled out Son Heung-min’s opener to win the tie 4-3 on aggregate.

Tottenham produced a superb first-half performance creating several opportunities, but initially found themselves unable to break the deadlock. Both Son Heung-min and Harry Kane spurned a couple of half-chances, the former darting a shot across the face of goal, just wide of Buffon’s left post.

As luck appeared to be stacked heavily against the Italian Champions, Jan Vertonghen, on a night to forget, recklessly brought down Douglas Costa, but the visitors were denied the clear penalty by referee, Szymon Marciniak. Punishing their misfortune, Son fumbled the hosts ahead in a scrappy, but hugely valuable goal just before half-time. Juventus would need at least two away goals to keep alive Buffon’s Champions league dream in what appears to be his final season.

Yet, in what had been a composed and controlled display, a pivotal three-minute spell after the hour mark sparked the Italian side’s ambitions into life. Higuain, who had missed a penalty in the first leg in Turin to have potentially put the tie beyond Spurs’ reach, snuck in behind Vertonghen to latch onto the end of Sami Khedira’s header and delicately finish past the stranded Hugo Lloris.

From scorer to provider, the Argentine set up his fellow countryman, Paulo Dybala, releasing the lively forward past an inattentive Spurs defence before finishing emphatically, silencing a stunned Wembley.

When in winning positions, the best teams rarely give them up, and Juventus gave Spurs a bruising lesson in both experience and bottle. The stoic Chellini prevented Kane, whilst Buffon did just enough to keep the hosts out in the final minutes. A late chance for Kane, hitting inside of the post as the clock wore thin, left the Englishman poised for celebration, only able to watch the rebound trace over the goal line, with Lamela unable to follow up.

This result will come as a damaging defeat to Tottenham who, despite showcasing the immense talent in their ranks, once again, as Chiellini has since reminded them, appear to lack mental toughness when most needed. Yet from a Juventus point of view, there are nights you simply wish to never end, and this was one for the Italian side. In a scintillating evening filled with drama, passion and euphoria, experience and precision prevailed.

In the other game of the night, Manchester City qualified for the quarters in what appeared to have already been a settled tie following the 4-0 thrashing in the first leg. Yet, FC Basel won the night, inflicting a first home defeat upon City since 2016, exposing frailties seldom seen this season under Guardiola.