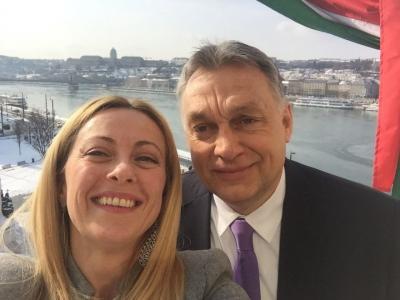 ROME - Giorgia Meloni, the leader of the small right-wing, anti-immigration party, Brothers of Italy, made a strange detour from the election campaign on Wednesday, arriving in Hungary to speak to the country’s controversial leader, Viktor Orban.

Meloni posted photos of herself with the populist, national-conservative leader overlooking the city of Budapest. Brothers of Italy is part of the right-wing coalition of Silvio Berlusconi and Matteo Salvini.

Orban has frequently come into conflict with the European Union and regularly alleges that the continent’s culture is under threat from “Islamisation” that he believes is being instigated by shadowy elites in Brussels and across Europe.

However, his critics suggest that this “defence” of Hungary more often takes the form of anti-Semitism directed at the financier, George Soros, that eerily echoes Nazi propaganda of the 1930s.

The Brothers of Italy leader explained that she had spoken to Orban about “the battle against uncontrollable immigration and the defence of Christian roots in Europe.”

“There is a group of nations,” she proposed, “that are busy defending the actual economy from great speculation and defending European identity from Islamisation.”

Brothers of Italy’s roots lie with the post-fascist Italian Social Movement. Since founding the party in 2012, Meloni has sought to broaden its appeal, riding the wave of anti-immigration feeling in Italy and borrowing from other populist movements with “Italians First” rhetoric.

However, her role in the coalition alongside Forza Italia’s Berlusconi is not without its own tensions. Meloni previously served as youth minister during Berlusconi’s last stint as Prime Minister, but the two also clashed when Meloni ran for Mayor of Rome in 2016.

Likewise, her stance on Europe jars with Berlusconi’s overtures to Germany and France.