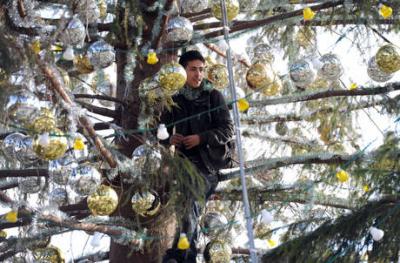 One protester climbed the Christmas tree outside the obelisk

ROME -- Security was extraordinarily tight today following a violent clash between police and protesters identifying themselves as 'indignados' (indignants) in St Peter's Square last Saturday. Out of the 30 protestors gathered to protest against the Church's privileged tax status in Italy, three were arrested by Vatican gendarmes, Vatican sources said.

Clashes began when protesters erected coloured tents in the square and one of them reportedly climbed the Christmas tree outside the obelisk. Among the slogans shouted by protesters were: “Liberty”, “No to violence” as well as more provocative messages such as “Corrupt Church”, “Criminal Pope” and “The Vatican should pay taxes like everyone else.”

Three arrests were then made by Vatican security forces. The remaining ‘indignados’ then surrounded the vehicle taking their comrades into custody and refused to leave until they were released.

Protesters raised their hands and threw themselves on the ground shouting: “No violence” but refused to leave the Piazza and had to be removed by police. The police resorted to truncheons to restore order.

According to Alice, a young indignata, “We were only sending a peaceful message. We had our hands up, the police that were trying to move us away hit us with truncheons. Luckily, they did not hit us too hard, however one boy now has a swollen eye and another a broken nose.”

“What happened is unbelievable, we expected at least someone from the Vatican would come and call for an end to this violence,” said Julian Garcia, from Barcelona, adding, “They started kicking and punching us and finally used truncheons.”

“No one was seriously injured but what happened is nevertheless very serious because we were also protesting on behalf of the police, because this is a moment of crisis for all,” commented Francesco Siddi from Sardinia, “I suspected that no one from the Vatican would have intervened but at least we entertained the hope.”

Father Federico Lombardi, editor of the Vatican newsroom, told ANSA that the Vatican had chosen not to intervene due to the nature of the indignados’ actions, saying that he believed that, “based on the actions carried out and the expressions used, they wanted to use the square in an improper way, inconsistent with the nature of the place.”

This is not the first time the indignados have hit the headlines in Italy. Over the last year they have staged several anti-capitalist protests, occasionally leading to violence.