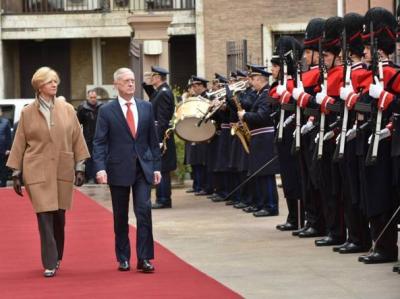 ROME – James Mattis, Head of the Pentagon, will be in Rome Tuesday to attend a meeting of 15 Defence Ministers from the anti-ISIS coalition and to meet with Italian Prime Minister, Paolo Gentiloni, and Roberta Pinotti, Italy’s Defence Minister to discuss the aftermath of ISIS and Italy’s strategic role in the region.

Mattis will first meet with Pinotti, then move onto a meeting with Gentiloni, as the first of a series of meetings that the United States is holding with European countries.

Pinotti stated, in comments to Corriere della Sera, that “relations between Italy and the United States are excellent. The intention is that of reinforcing the common commitment for the defence and international security.”

Various themes will be discussed, including the aftermath of the conflicts in Syria and Iraq and the repatriation of foreign fighters. Corriere reported that the United States is hoping to convince Italy to send more carbinieri to Syria.

However, Mattis has emphasised in recent times the importance of Italy in the strategic vision of the United States, suggesting it was on the front line in the fight against ISIS in the Mediterranean and the migration crisis between Africa and Europe.