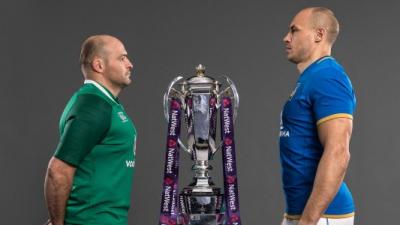 ROME - Ireland dispatched Italy in the second week of the Six Nations, winning the game 56-19, and dominating from start to finish in Dublin.

The game was already out of reach for Italy following a first-half display where the home side ran in four tries with total ease.

Robbie Henshaw crashed over from five metres for Ireland’s first after concerted pressure in the opening ten minutes. It was followed by two more tries in ten minutes. Lovely play between Keith Earls and Stockdale set Connor Murray free and then Bundee Aki scored his first try for Ireland, racing through a gap in Italy’s defence.

Aki’s pace and ability to find holes in Italy’s backline was notable and he was the instigator for releasing Keith Earls on the right wing in the 36th minute for Ireland’s fourth. Jonny Sexton kicked all four conversions with consummate ease giving his side a 28-0 lead at half time.

Italy had seen very little of the ball and had struggling to handle Ireland’s multiple runners from deep, a real trademark in the partnership of Murray and Sexton.

Any hopes of a second-half revival were quickly dashed, however, when Sergio Parisse and Tomasso Allan blundered in the midfield to gift Henshaw his second try, though he succeeded in injuring himself in the process.

That injury provided a measure of Ireland’s dominance. As Henshaw left the pitch with 46 minutes gone, he had already scored two tries, broken Italy’s line eight times and made a total of 96 metres in runs. Stats confirmed when Ireland removed their two best players, Sexton and Murray, with half an hour to go.

Rory Best bundled another over for Ireland before Italy finally saw some of the ball. Italian TV had bemoaned their side’s display at half time, noting the space out wide if they could get their hands on any possession. With 55 minutes gone, Castello broke through a weak Irish tackle, popping the ball inside to Allan to record Italy’s first points.

Italy ended up scoring two more tries from Edoardo Gori and Mateo Minozzi as the game became more fractured in the final 20 minutes. However, Ireland’s Jacob Stockdale scored two of his own in the meantime, including a wonderful 60-metre run that left the Italian defence grasping at air.

After last week’s encouraging performance against England, Italy’s Coach, Conor O’Shea, will be bitterly disappointed at a first half effort that left much to be desired. They will need to recover quickly after this confidence-sapping display.