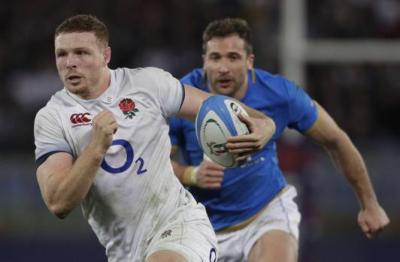 ROME – Italy succumbed to a heavy defeat against England in their opening Six Nations fixture at the Stadio Olimpico Sunday, with the away side running in seven tries.

The final score of 46-15 was a heavier loss than the home side deserved, but Italy continue to struggle in the last 20 minutes of the match. They will have to play more consistently if they hope to break their 13-match losing streak in the tournament.

That said, England were on the front foot from kick-off. George Ford and Owen Farrell combined nicely to slice Italy open two minutes into the game, freeing Anthony Watson out wide to run in the away side’s first try from their first attack.

Not long afterwards, an almost identical back’s move on the halfway line allowed Watson to charge down the right wing for his second.

But with 20 minutes gone, Italy produced their own set-piece brilliance. A break from the back of the scrum left them five metres from England’s line. It was left to their fly-half, Tommaso Allan, to produce an inspired pass over England’s helpless defence for Tommaso Benvenuti to score.

Italy looked comfortable in possession for much of the first half. However, it was when they were pressed to defend that gaps started appearing. Only five minutes after they had narrowed the deficit, they once again crumbled under English pressure. Farrell, this time, finding a gaping hole in Italy’s line and dashing 10 metres to score.

England were by no means out of reach by the start of the second half, with the game lying at 17-10 to the visitors. A silly handling error in the scrum, however, set the tone for Italy’s half and presented Farrell with the simplest of penalties.

Simply put, Italy were failing to put England under pressure for concerted periods. In their best passage of play they had one try disallowed, after a lovely offload from the evergreen Sergio Parisse, and scored another through a fine finish from Mattia Bellini by the corner flag. In the meantime, however, their defence once again parted for England’s debutant number-8 Simmonds to waltz home.

It was perhaps forgivable that Italy should fade towards the end of the game against the second-ranked team in the world. The energy of England’s substitutes has become one of the hallmarks of Eddie Jones’s coaching, but tries for Ford, Simmonds and Jack Nowell in the last 15 minutes owed as much to Italy’s increasingly tired outfit, as it did to English energy.

Conor O’Shea told Italian television after the game that he was “proud but also angry” at the performance of his team, with too many disciplinary errors emerging in the second half. Certainly, his team’s defensive line-speed will need to be improved next week when they travel to Dublin to face Ireland.

Nonetheless, he should also take heart from the way Italy competed on the day, having 56 percent of the possession and exposing England in the wide areas for two lovely tries.

England, however, continue to march on. Watson was ruthless and deservedly awarded Man of the Match. Sam Simmonds also produced a lovely debut performance, blistering pace allowing him to run in a brace of tries.

In the other two games, Ireland were saved by a wonderful last-minute drop-goal from Johnny Sexton, beating France 15-13. In Cardiff, Wales cruised to victory against a poor Scotland, Leigh halfpenny scoring 24 points in the process.