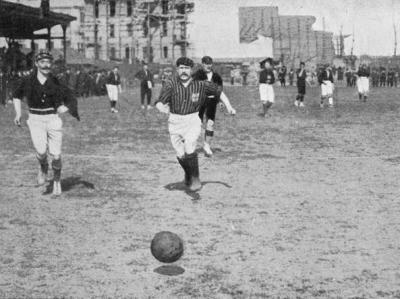 ROME - The name of Herbert Kilpin is barely known outside of Italy and, until recently, was almost forgotten in his adopted city of Milan. It was in Lombardy's capital that Kilpin was to found the Milan Foot-ball and Cricket Club in Dec 1899, the global footballing giant known today as AC Milan.

Kilpin was born in Nottingham in 1870 but moved to Italy in the 1890s to lend expertise in the textile industry. Even before his move, he had a keen interest in all things Italian, even founding a red-shirted youth football team in honour of Giuseppe Garibaldi.

It was in Italy, first in Torino and then in Milan, that Kilpin helped not only to found football teams, but also to import the British rules of the game. Known for drinking whisky before and after games, Kilpin led the rossoneri to three league titles in the next decade, only retiring from his beloved game when he was 43. He died three years later in 1916.

Wednesday, Jan 24, will be the 148th anniversary of Kilpin's birth and calls have been renewed in the Corriere della Sera to properly recognise the achievements of Milan's founder.

Antonio Carioti took to the pages of the newspaper to call on Milanese officials to dedicate "a street to Kilpin... let us reserve a less anonymous burial place to facilitate the pilgrimage of fans to his tomb."

Kilpin's grave was only rediscovered in 1998 after the dedicated search of Luigi La Rocca, a fan and preserver of the club's history. The Englishman had been buried in an unmarked grave in Milan's Cimitero Maggiore under the italianised "Alberto Kilpin." After the discovery, La Rocca campaigned to have Kilpin's remains moved and they now rest in the Cimitero Monumentale. But for some, the small plaque in his honour there is not sufficient to the stature of the man.

Carioti acknowledges that much of the blame lies with the directors of AC Milan themselves, who under former owner, Silvio Berlusconi, showed "little interest in promoting memories unrelated to Berlusconi's administration."

But he is also concerned that the neglect of Kilpin is part of a wider story of favouritism towards Milan's other club, Inter. Carioti points to the discrepancy between sites honouring those associated with Inter and those with Milan. "If Milan is the only city in Europe in which there are two European Cup winners, the recognition must be divided in half."