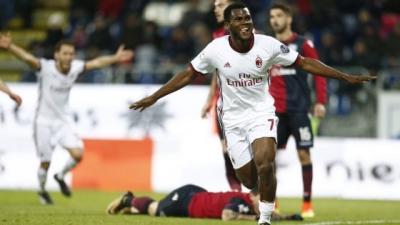 ROME - The winter break fell later than usual this year in Serie A, with Juventus trailing top-placed Napoli by a single point after the last round of fixtures on Jan 6. Poor results in recent weeks for both Inter and Roma have left them well adrift of the top spots. At the other end of the table, things look dire for Benevento, who have collected only seven points from 20 games.

With Juventus playing on Monday night, it was left to Napoli to continue their quest for a third scudetto against Atalanta. Doubts have been raised about the staying power of Napoli's side in the league, but Maurizio Sarri will be pleased that his side ground out a 1-0 victory in Lombardy.

Lorenzo Insigne's curled shot from 25 yards was the best effort in an otherwise staccato first half, with Napoli's famed front three of Insigne, Dries Mertens and Jose Callejón failing to find their rhythm.

Etrit Berisha produced a wonderful reflex save to deny Callejón's close-range header early in the second half. However, it was Callejón who eventually unlocked the Atalanta defence in the 65th minute with a through-ball to the onrushing Mertens, the latter driving powerfully home from a tight angle to give Napoli the win.

Those looking for relief from the increasingly mercenary world of football will have been heartened by Bologna's Simone Verdi, who made headlines after he refused to sign for Napoli this week. The side's fans responded with "Honour to Verdi" banners and the team requested that he be made captain for the day.

Verdi responded in kind by creating all three of Bologna's goals in a 3-0 demolition of Benevento. Guilherme should have put Benevento ahead in the opening half after a clever pull back from Andrea Costa in the box. But two lovely set-pieces from Verdi provided goals for Mattia Destro and Sebastien De Maio. Blerim Dzemaili found the bottom corner to wrap up the victory in the 88th minute.

Chievo briefly threatened to make Lazio's life difficult after they levelled the game at 1-1 in the 25th minute. They might have repeated the trick with the game at 2-1, when referee Rosario Abisso awarded a penalty to the gialloblu. A VAR referral, however, showed that Chievo's striker Mariusz Stepinski had gone down too easily. Lazio eventually ran way with the game, ending up 5-1 winners.

Andrea Barberis's beautiful free kick in the third minute set the tone for Crotone's 3-0 hiding of Verona. Protests from Verona's fans forced their manager, Fabio Pecchia, to deny that he was considering resigning, but he will be worried by the lack of defensive mettle displayed on Sunday.

AC Milan gave their manager, Gennaro Gattuso, his first away win against Cagliari after two goals in six minutes from Franck Kessie. The game ended frantically with both sides reduced to ten men but Milan clung on to edge the game 2-1.

Elsewhere, both Sassuolo's match with Torino and Udinese's with Ferrara-based SPAL, ended in 1-1 draws. SPAL now lie 18th in the table with a worrying lack of wins to their name. A hat-trick from Fabio Quagliarella gave Sampdoria an easy 3-1 home victory against Fiorentina.

Eyes turned finally to the key clash between Inter and Roma in Sunday's late kick-off. Ivan Perisic had two good opportunities in the opening 30 minutes to put Inter ahead but it was a terrible mistake from Inter left back, Davide Santon, that gifted Roma the lead. His failure to clear a routine goal kick allowed Stephan El Shaarawy to neatly lift the ball over Inter's onrushing keeper.

Roma fell ever deeper into their own half as the game wore on. However, Inter were finding more space and Matias Vecino headed Inter level with four minutes remaining. A draw probably reflected the balance of play on the night.