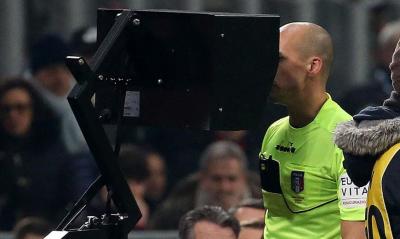 ROME - Halfway through the current Serie A season, referees and managers met in Milan to discuss the future of the controversial Video Assistant Referee (VAR) system, agreeing to continue with its implementation and vowing that improvements would be made.

VAR was introduced into the league at the beginning of this season and has proved a point of contention between fans, managers and players. The system involves an assistant referee assessing the decisions of the on-field officials with the benefit of video replays.

Chief of the complaints against VAR has been the amount of time decisions have taken. Juventus manager, Max Allegri, complained earlier in the season that the game was becoming like baseball: "You're at the stadium 10 hours. You eat a few nuts. You see some action every quarter of an hour." But the referees present in Milan stressed that they had worked hard to reduce the amount of time spent on decision-making.

After discussing the issue for an hour and a half on Monday, even vocal critics, such as Lazio's manager, Simone Inzaghi, agreed that it was important to move forward with VAR. "It's a technology which I'm against," Inzaghi stressed, "however, we have analysed the data and it is something that is going well. It is helping the game and it is right to continue."

The data itself is impressive. 1,078 reviews have been conducted in the 210 games this season, with 60 original decisions being overturned in favour of video evidence. Of those corrections only 11 have been deemed incorrect, seven of which were judged to have affected the final outcome of the game.

A pragmatic consensus appeared to have emerged from the discussion with most managers agreeing to work on improving the system. "90 percent of the decisions were correct," noted Inter Milan coach, Luciano Spalletti, "it's clear that... [we need] to work on the 10 percent for perfection, it would be devastating in this moment to turn back."

There were also calls for managers to be allowed to refer incidents for video review and, decisions to be transmitted to the whole stadium (rather than the current pitch-side monitor) for added scrutiny.

Perhaps most relieved was Marcello Nicchi, President of the Italian Association of Referees. "VAR is a product that works. There are errors and there will be others," but he highlighted that its implementation in Italy put it at the cutting-edge of the game. "We are an example for all the world's football federations."