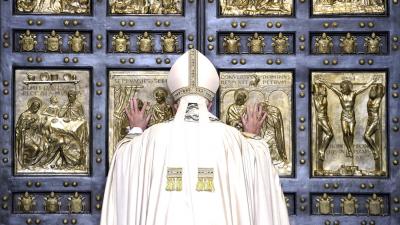 ROME - Pope Francis’ speech to the Diplomatic Corps on Monday demonstrated the increasingly political role of the Vatican in the wider world. The Pope focussed on the human rights of migrants, the right to employment, and the family unit.

The pontiff’s concern for migrants is nothing new, often compelling Catholics to aid migrants as a Christian duty, he praised Italy for having "shown an open and generous heart and offered positive examples of integration." He continued, "Migrations have always existed in the Judeo-Christian tradition, the history of salvation is essentially a history of migration."

The speech was made in open reference to the Universal Declaration of Human Rights, a document that has been enforced for 70 years, forcing a comparison between then and now. "At a distance of 70 years, it was painful to see how many fundamental rights continue to be violated today," he lamented.

Continuing with his unique style of religious and political address, Francis emphasised the need for job creation: "no peace or development if individuals are not given the chance to contribute personally by their own labour to the growth of the common good." Employment remains a key issue in the lives of Italy’s young adults as well as a central point of conflict in the attempted integration of migrants into Italian society.

The pope’s speech followed the drowning of 64 migrantsoff the coast of Libya. In many ways, his call for stability, job creation, and proactive policies in dealing with the incoming migrants speaks to both the continent that the deceased were fleeing as well as the readiness of the Europe that will receive them.