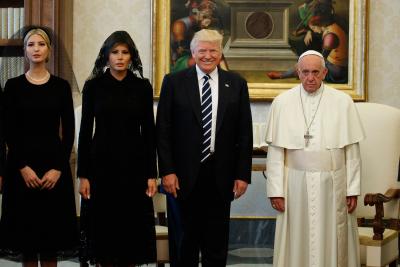 ROME - Pope Francis has expressed his concern over United States President Donald Trump’s forthcoming speech in which he will recognise Jerusalem as the capital of Israel. In the pope’s weekly general audience Wednesday, he recognised the tension building up in the Middle East in anticipation of Trump’s speech, and asked for the status quo to be respected.

“My thoughts now go to Jerusalem, regarding which I cannot silence my deep concern about the situation that has developed over the last few days and, at the same time, make a heartfelt appeal for everyone to respect the status quo of the city, in conformity with the pertinent United Nations Resolutions.”

The pope also asked for “wisdom and prudence to avoid adding new elements of tension in a world panorama that is already inharmonious and marked by many cruel conflicts.” He spoke of Jerusalem as a “unique city, sacred to Jews, Christians, and Muslims who venerate the Holy Places with their respective religions, and that has a special vocation to peace.”

Donald Trump is expected to formally recognise Jerusalem as Israel's capital at 1 pm in Washington Wednesday. This talk will not merely be rhetoric as Trump is also expected to approve the relocation of the US embassy in Israel from Tel Aviv to Jerusalem. Actions have already been taken to prevent backlash following the announcement. The President of Turkey, Recep Tayyip Erdogan, has invited ambassadors from the 57 member countries of the Organisation of Islamic Cooperation (OIC) to meet next week in Istanbul for a summit to discuss the ramifications of Trump's actions.

Other world leaders have not agreed with Trump’s call, including the Saudi Arabian Prince Khalid bin Salman and French President Emmanuel Macron. The Palestinian President Abu Mazen has reportedly warned President Trump of the “dangers of such a decision on the peace process, on security and the stability of the region in the world.” American news organisation CNN has reported that the US Consulate in Jerusalem has warned of “three days of rage” organised by Palestinian groups across the West Bank.

Trump’s ally in other matters, British Prime Minister Theresa May, has also expressed her disapproval, saying that the status of Jerusalem should only be defined “through an agreement negotiated between Israelis and Palestinians,” at a meeting in the House of Commons.

This controversial decision by Donald Trump can be seen as an attempt to galvanise conservative support for the politician as he loses his fan base. The recognition of Jerusalem was a campaign point, and his upcoming action may be used to convince the American public that he is coming true on his electoral promises.