ROME - The critically acclaimed major retrospective, The Pink Floyd Exhibition: Their Mortal Remains, comes to the Eternal City some 50 years since the birth of one of the world’s most pioneering and influential bands in history.

The exhibition, promoted by the Dept. of Cultural Growth of the City of  Rome, is scheduled on the coming Jan. 19. This will be the first exhibition to take place at the museum under its new management, Palaexpo. Following its highly successful debut at London’s Victoria and Albert Museum earlier this year, which saw over 400,000 people tear down the wall, the exhibition moves to Rome as its first international destination on the global landscape. The exhibition continues the first collaboration in decades of Pink Floyd’s remaining members and is produced and promoted globally by Concert Productions International B.V. The Rome exhibition is produced in association with MondoMostre and Live Nation. Due to the presence of Nick Mason, it has been introduced to the press by the Rome deputy mayor, Mr. Luca Bergamo and organizers.

Originally conceived by Storm Thorgerson and developed by Aubrey ‘Po’ Powell of Hipgnosis, working closely with Nick Mason (Exhibition Consultant for Pink Floyd), The Pink Floyd Exhibition: Their Mortal Remains features many previously unseen objects collected over the band’s eclectic history. It is an audio-visual journey through 50 years of one of the world’s most iconic rock groups, and a rare and exclusive glimpse into the world of Pink Floyd.

The exhibition’s phenomenally successful and mammoth run at London’s Victoria and Albert Museum, described by national British newspapers as “stunning,” “a real feast for the senses” and “almost as good as seeing the band live,” was the most successful exhibition of its kind. The run at Rome’s MACRO will be a continuation of this vast success. MACRO is located less than 1km from The Piper Club, which played host to Pink Floyd’s first shows in Italy in April 1968. The exhibition celebrates Pink Floyd’s place in history as the world’s cultural landscape changed from the 1960s. The band occupied a distinctive experimental space and was the foremost exponent of a psychedelic movement that changed the understanding of music forever, allowing them to become one of the most important groups in contemporary music.

Pink Floyd have produced some of the most iconic imagery in popular culture: from cows, The Dark Side of the Moon prism, pigs flying over Battersea Power Station, and Marching Hammers, to giant inflatable teachers; their vision was brought to life by creative individuals such as modern surrealist and long-time collaborator Storm Thorgerson, satirical illustrator Gerald Scarfe and psychedelic lighting pioneer Peter Wynne-Wilson.

The flow of the exhibition, in chronological order, is enhanced throughout by music and the voices of past and present members of Pink Floyd, including Syd Barrett, Roger Waters, Richard Wright, Nick Mason and David Gilmour, talking about their musical experiences through their experiences and musical experimentation via sound specialist Sennheiser’s intuitive GuidePORT system. This culminates in the Performance Zone, where visitors enter an immersive audio-visual space, which includes the recreation of the very last performance of all four members of the band at Live 8 in 2005 with Comfortably Numb, specially mixed using Sennheiser’s ground-breaking AMBEO 3D audio technology, as well as a Rome-exclusive video of One Of These Days, taken from the band’s iconic live performance in Pompeii. 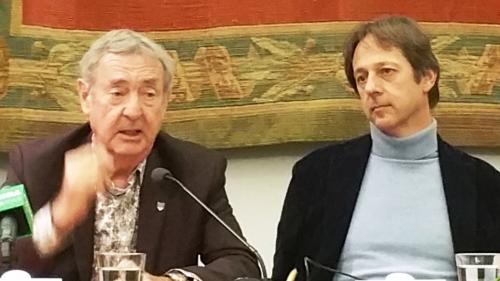