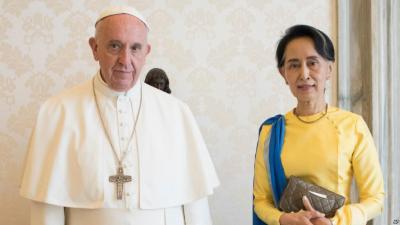 Pope Francis and Aung San Suu Kyi in a private audience May 4, 2017. Photo from voanews.com

NAYPYITAW - The Pope Francis is midway through his pastoral trip to Myanmar, and gave a highly anticipated speech Tuesday calling for peace in Burma without reference to the word ‘Rohingya,’ as per the advice of the Archbishop of Yangon, Charles Maung Bo. His words have been chosen carefully as a consequence of the great religious tension in the region.

The Pope has traveled to Southeast Asia to encourage and foster the growth of the Christian communities in the region. The Christian groups in Burma do not receive the same rights as the majority group of Buddhists. On top of this, Muslims in Burma have been subject to heightened military aggression, in what has been referred to as ethnic cleansing. Since August of this year, up to 620,000 ‘Rohingya’ have fled the country to Bangladesh, according to news sources. The country of Burma does not formally recognise the majority Muslim ‘Rohingya’ as citizens, nor does it accept the use of the term, referring to them instead as ‘Bengalis.’

While on the stage with Burma’s civilian leader Aung San Suu Kyi, the Pope spoke of his wish for tranquility in the region. "The future of Myanmar must be peace, a peace based on respect for the dignity and rights of each member of society, respect for each ethnic group and its identity, respect for the rule of law, and respect for a democratic order that enables each individual and every group - none excluded - to offer its legitimate contribution to the common good."

He added that the people of Myanmar had “suffered greatly, and continue to suffer, from civil conflict and hostilities that have lasted all too long and created deep divisions." As a consequence of this, he suggested that “religious differences need not be a source of division and distrust, but rather a force for unity, forgiveness, tolerance and wise nation-building."

His speech has met a mixed reaction, with the EU’s ambassador to Myanmar, Kristian Schmidt, praising the speech to CNN. In his view, the Pope’s support for the group was obvious when reading “between the lines.” Activists, on the other hand, have expressed their dismay that the Pope did not specifically mention the group as he has in the past.