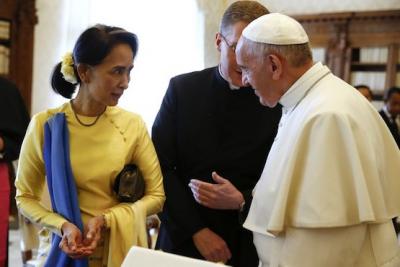 Pope Francis meets with Myanmar dignitaries in a private audience in the Vatican. Photo from from heraldmalaysia.com

At Yangon, the Pope was welcomed by the Htin Kyaw, the President of the Republic, as well as groups wearing traditional dress, 100 children, and bishops from Myanmar. The Guard of Honour also accompanied the well-wishers. Many visitors wore t-shirts with the slogan “Love and Peace,” and waved yellow and white Vatican flags. There was also chanting of “we love Papa,” according to news sources.

The Pope is staying at the residence of Cardinal Charles Maung Bo, Archbishop of Yangon, and this evening will celebrate Mass. The two countries of Myanmar and the Vatican City established full diplomatic ties in May this year, connecting the 650,000 Catholics in Myanmar to the centre of the Catholic world. However, some tension still remains over the fate of the ‘Rohingya’ people.

The Cardinal has asked for the Pope not to use the word ‘Rohingya’ during the trip, as the name for the ethnic group, most of whom identify as Muslim, is a sensitive one. Bo has previously said that “this word is very much contested and not acceptable by the military, nor the government, nor the people in Myanmar.” Greg Burke, the spokesperson for the Vatican, has said that the Pope has listened to this advice carefully but said that “it is not a forbidden word.” The Pope will go on to visit ‘Rohingya’ refugees in Bangladesh.

In a telegram sent from the plane, the Pope described himself as a “pilgrim of peace” in his journey. He also said that he prays “for the Italian people, so that they can look to the future with confidence and hope, building the common good paying attention to the needs of all citizens.”