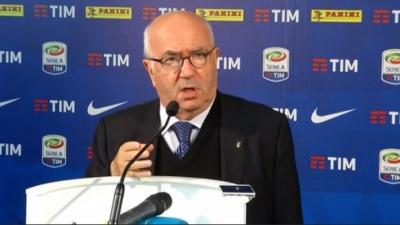 ROME - Carlo Tavecchio, the head of the Italian Football Federation, has announced his resignation following Italy’s failure to qualify for the World Cup for the first time since 1958. Italy's coach Gian Piero Ventura has been absent in his post for almost a week, resigning two days after Italy's exit from the Cup, but it is only now that Tavecchio has agreed to step down.

The news was delivered by the president of the Italian Referees' Association, Marcello Nicchi to the news site Ansa, as he left the federation council meeting. “Ambitions and political strife have impeded us from confronting the reasons for this result.”

Tavecchio has also asked for the resignation of the whole board of the Football Federation. Elections for the new council are to take place within 90 days, and Tavecchio is expected to handle ordinary business until a new president is elected.

Giancarlo Abete, former FIGC president, also spoke to Ansa about his support for the resignation of Tavecchio. "We will ask Tavecchio to take a step back and tender his resignation as an act of responsibility, even if the responsibility is not all his."

Tavecchio has told reporters "I'm leaving because I failed. I apologise to all Italians. Now is the time for Italian football to embark on a new era." The former President had earlier described Italy's loss as preventable "with a little intelligence ... the Swedish players are very tall and strong, so we should've approached them with a different philosophy."

He has also lay the blame of Italy's failure to qualify not just on himself, but also on former coach Ventura. "The choices made by the coach were wrong. I have to say it."