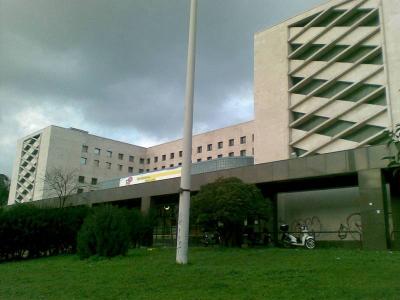 ROME -- I spent a lot of time this Christmas painstakingly making hampers for my family and friends at home. I packed boxes with limoncello, panettone, pasta and other Italian delights, and all in all when I trotted off to the Post Office, (well if I could have trotted lugging six hampers I would have), I was feeling very happy with myself, and excited to send them on their voyage across the seas to take their well earned places under the Christmas trees of the families I thought would be very pleased indeed with the gesture.

This was the first time I attempted to post them. I arrived at three minutes past seven, where I was informed that the post office shuts at seven. With a sigh, I lugged the boxes back home, with a little less spring in my trot than before. But no matter, I would get there earlier tomorrow.

So at 6:30pm the next day, I tried again to post the boxes. After finally working out that I had to get a ticket, and umming and ahhing for a while over which ticket I should get from the machine, I managed to get myself into the correct waiting area. I sat there for half an hour. When my number finally flashed red above the counter, I dragged the boxes up. In my very broken Italian and now quite accomplished mime skills, I managed to convey to him, charades-style that I wanted to send them to England.

I got a shake of the head and a stout ”no.” “perché?” I asked. The boxes I had used had writing on them, the name of my housemate’s company, who had kindly given them to me for the occasion in a fit of festive generosity. Apparently, this makes posting the boxes impossible. So I asked to borrow some parcel tape to cover the offending text with.

Another hearty “no.” A post office which doesn’t stock any parcel tape.

With a sigh, I once again took the boxes home, nowhere near trotting. I would have to wait until tomorrow to buy some tape to cover the writing.

The next day, I triumphantly marched up to the desk, after a mere 20 minutes waiting, with my fully taped up parcels. After filling in countless forms, I asked how much it would cost. I nearly cried when she said 25 Euros each. I had five of them.

Thinking that I would be rather glad when the blessed things had gone, I attempted to swallow my horror and pulled my card out from my purse. The lady took one look and said her favourite word… “no.” I will no longer find that Little Britain sketch with the computer funny.

I stomped back and took the parcels back once more to my apartment. At least my arms got a good work out, I won’t have to lift weights for a month.

The following day, I approached the post office rather timidly, not daring to hope that I might actually manage to post anything. When my number, P087 flashed, I took a deep breath and walked slowly up to the counter. I shakily placed the parcels one by one on the counter, with the forms they had kindly let me take back with me.

“Per favore?” I whispered.

When the parcels had gone and I had been robbed of my 125 Euros, I swiftly exited the building as fast as I could without breaking into a run that would no doubt raise suspicions as to the nature of the parcels I had just deposited.

One thing is for sure, my grandparents had better bloody like them.