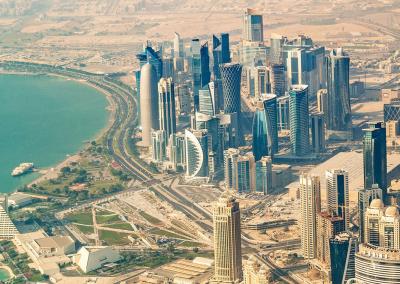 ROME- To the casual reader of foreign affairs, the Qatar crisis has been eclipsed by more pressing issues—Kim Jong-un’s ballistic brinkmanship and the looming threat of war on the Korean Peninsula is certainly a more gripping storyline. However, as the standoff in the Arab Gulf intensifies, opportunities to deescalate and return to the status quo — of cordial intra-Gulf relations — diminishes, and with it, Gulf stability.

From the outside, the Qatar crisis looks like a family feud. The Arab Gulf states share the same religion, language and culture and are sewn together in a community of fate—socio-politically and, crucially, economically. Hydrocarbon-fuelled economic growth has generated national wealth and a real global actorness for the Gulf Cooperation Council (GCC) which runs parallel to its members: Bahrain, Kuwait, Oman, Qatar, Saudi Arabia, the United Arab Emirates, (UAE). While the bloc is meant to encompass shared strategic values, the individual members remain free to pursue their own self-interests. And only two fundamental principles must be adhered to: cooperate in vital areas, such as security, and, uphold a non-interventionist approach to one another.

This is where Qatar and the other GCC states have parted ways.

Since 2011, the GCC has assumed a leadership role in countering terrorism and radical ideologies and its members are central to interdicting terrorist financing. Yet Qatar supports an assortment of nefarious groups across the region: the Shura Council of Mujahideen in Libya, Jubhat Fatah al-Sham (aka Al Qaeda) in Syria, the General Military Council for Iraqi Revolutionaries, Hamas and the Muslim Brotherhood in Egypt and Palestine and the Houthi in Yemen. It even stands accused of supporting terrorist groups among its own Gulf allies—from violent fractions of al Wefaq in Bahrain to rebel groups in Saudi Arabia’s restive eastern provinces.

This terrorism-centric crisis is not confined to the Gulf. It is trans-regional. The frosty relations between Doha and Senegal, Gabon, Mauritania, Libya and the Republic of Chad’s recent (23 August) expulsion of Qatari diplomats attests to Qatar’s proliferating of instability around Lake Chad and the Sahel. What Doha packages as moderate Islamist groups (re: the Muslim Brotherhood) form the kernel of fundamentalism throughout the Middle East, into Africa and even Europe.

So, the policy of boycotting-to-deter-Doha signals that Qatar’s actions need redress or the country risks additional restrictions. To end the impasse, the lead boycotting states (Bahrain, Egypt, Saudi Arabia and the UAE) forwarded a series of 13 demands mostly focused on retarding the flow of terrorist financing, extraditing wanted terrorists and the closure of an assortment of Qatari-owned media that are accused of inciting violence in other GCC states. Qatar rejected the demands out-of-hand and the GCC remains stuck in suspended animation. But pressure is mounting and something is going to give.

The Arab Gulf is on the brink of a serious remapping. A Gulf Cooperation Council without Qatar is vulnerable as the Gulf states have poured financial resources and political energies into establishing a combined military capability, an interoperable bulwark to deter Iran, Iraq or any of the other external challengers. Remove Qatar and the others will have their hands full trying to reconfigure their capabilities to account for the loss of a major security investor. This will pose a double challenge if, as all the signs point, Qatar abandons the bloc, shift sides and continues to cozy up to the most persistent regional challenge—Islamic Revolutionary Iran. It may be time to scupper the GCC altogether and look into building an entirely new strategic platform, an Arab Cooperation Council, that could reach out to include non-Gulf Arab allies such as Egypt, Jordan and Morocco. Such an initiative is becoming increasingly important especially as Iran seeks out new regional allies and the GCC risks being out-flanked.

In 2016, the Turkish-Qatari Divisional Tactical Headquarters (aka Turkey’s military base in Qatar) opened as a way of cementing Ankara’s relationship to Doha. Both support the Muslim Brotherhood and their relationship is based on turning the tide in support of Islamic revivalism in regional and international political life—a Sunni version of the Iranian revolution, not at odds but rather in-sync with the Islamic Republic. Now that Iran and Turkey have reconciled, they have begun work on forming an altogether new axis, a north-eastern tier to hem-in the Arab Middle East and limit its regional influence. Qatar is becoming a cog in that axis but it does not belong there.

Most Qataris — including senior members of the ruling al-Thani family — do not want an irreparable severing from the other Arab Gulf states and are looking for more dynamic solutions. Some are rumoured to be preparing a bloodless, intra-family coup d’tat. Abdullah and Hamad bin Ali al-Thanihave reached out to Riyadh, Manama and Abu Dhabi to gauge support for an eventual deposing of the current Emir, Tamim bin Hamad bin Khalifah al-Thani. Others are anxiously waiting to see what comes next. But one thing is certain: Qatar’s participation in an Iran-centred alliance would alienate the country from itself…it would become an axis of one.

The old adage that geography is destiny is certainly a lesson that Shaikh Tamim al-Thani should remember when he embarks on his next foreign policy adventure. Qatar is located firmly on the Arab Peninsula and is not going anywhere. For the sake of stability, peace, prosperity and even for his own legacy, it is time for regime change—either Shaikh Tamim changes the practises of his regime or the wider regime — al-Thani and the Qatari public — will change him.