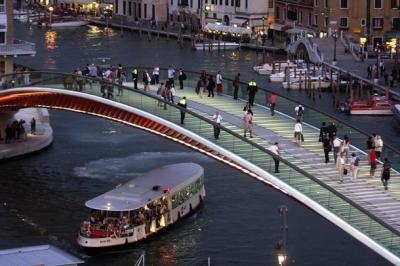 VENICE - Foreign visitors have made quite a name for themselves on the peninsula recently, and not for the right reasons. Following the recent incidents in Rome, where visitors were bathing in the Trevi Fountain, now a group of Belgian tourists have been jumping off Venice’s Constitution Bridge into the Grand Canal.

On Sunday morning at 6:00, a group of men gathered on the bridge, which links Piazzale Roma to the train station. They started taking off their clothes and four of them jumped into the water in an act of dangerous bravado. They did not care to think about the fact a boat may be passing below them.

The episode filmed on camera and reported to the police by a man who wishes to remain anonymous. Former police chief and town councillor Ottavio Serena said: “Once again, our city is used as a swimming pool in such an irresponsible and dangerous manner. And what would have happened if a boat had gone past like last year on the Rialto bridge?” Serena is referring to the incident in August 2016, when a drunk New Zealander threw himself off the bridge, landing on a water taxi, badly injuring both himself and the taxi driver.

Therefore, more crowd control barriers will be reinstalled, given that more than 10,000 people travel daily across bridge. Mayor Luigi Brugnaro immediately tweeted: “Caught! Thank you to the police, we’re all waiting for the information about these “heroes” to find the most exemplary punishment! It will all be public knowledge!”