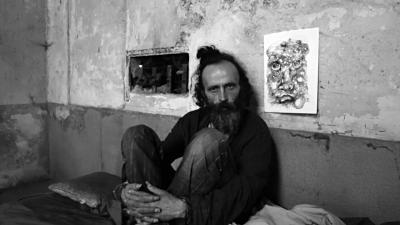 ROME- “AL DI QUA” is a docufilm by Corrado Franco which reveals the torment and humanity behind the homeless of Turin. It aims to “increase the public’s awareness” of poverty and homelessness in Italy and to encourage the government to “work together to find a solution immediately”, its director said. At a screening on Wednesday, several key figures were present to introduce the film with a discussion and debate on poverty in Italy.

The documentary-film contains up-close monologues from the real homeless protagonists recounting their stories and slow-moving zooming or panning shots of the homeless without any dialogue. It is dark and slow-paced, enabling the audience enter the world of the people “on the other side”.  The protagonists talk of their struggles with mental health, unemployment and their parents’ deaths and frequently lament the “indifference” of the public and politicians. One homeless man, Giancarlo, who was present at the screening, spoke about the depression and lonliness that followed the death of his parents and how he consequently lost his job in the family firm. "There are people who don't even look at you", he says, "who say, you ended up here, that's your business". Franco ensures that the humanity of these men and women is profoundly felt and that their consequent neglect is even more troubling.  As well as being an exceptional work of art, its haunting message of the forgotten poor gives it both resonance and relevance to the world we live in today.

At a screening at the Senate of the Italian Republic in Rome on Wednesday, Corrado Franco was joined by several political and academic figures to discuss the poverty in Italy. Franco was passionate about his work and its message, calling for greater intervention on the behalf of Italy’s government so that “no one gets left to their own devices”. The director expressed his desire for the government to work “fast”, as the more people that end up on the street and the longer people spend time homeless, the more difficult exit strategies become due to mental health issues and addictions triggered by extreme poverty.

Senator Alberto Airola of the anti-establishment Five Star Movement joined in the discussion, saying “I hate politicians who run away from intervention” and that new policies are necessary immediately to combat the “emergency”. Leader of Italy Left, Nicola Fratoianni, told of his desire for an end to “the war against the poor” and a new focus on a “war against poverty”. He said that “for 44 years, housing policy has been absent in politics” and spoke about the loss of jobs following the economic crisis and how labour is increasingly replaced by machines. Fratoianni believes that social and economic policy can go hand in hand, citing the “redistribution of jobs” which would come from having a lower retirement age (currently 65 years and 7 months). Professor of Public Economics at University of Roma Tre, Elena Granaglia, criticised government policy for omitting those who need it most. She explained how social assistance is granted to families and the elderly but excludes the average homeless person, a 40 to 44-year-old man. She expressed her wish for “selective politics” to come to an end and finished by quoting the English sociologist Tawney: “what thoughtful rich people call the problem of poverty, thoughtful poor people call… a problem of riches”.

Present at the discussion also was Gianpaolo Paoletto, chaplain at Martini hospital in Turin, who once suffered homelessness for a few days and now offers shelter and programs at his hospital for the homeless. He spoke of the need for “solidarity” to address the issue of homelessness, stating that it is not just solved by financial means. He spoke of the difficulties of managing a house, bills and cooking, for example, for the ex-homeless and the hands-on support that is needed. Sat alongside him was Giancarlo Levi, a homeless man from Turin who seeks refuge in Paoletto’s hospital and features in the film. He had borrowed a suit from Corrado Franco.

In Italy, there are approximately 50,000 people currently living on the streets and 4.5 million people live in absolute poverty (7.6 percent of the population).  Unemployment remains high, with a particularly alarming youth unemployment rate nearing 40 percent in (April 2017, ISTAT).

“AL DI QUA” has been nominated for a Nastro D’Argento for Best Italian Docufilm 2017 and David di Donatello Film Award 2016. It is aiming for Best Documentary in the Academy Awards 2018.