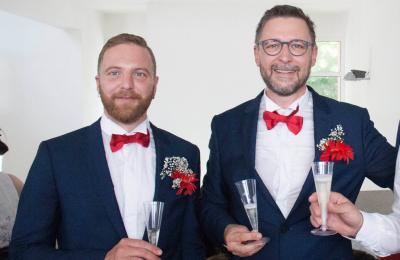 TRIESTE - Marco di Just, a local Scout leader in Staranzano, a comune in the Province of Gorizia, north-east Italy, has been invited to step down from his role, after his civil union with Luca Bortolotto, a municipal councillor, last Saturday. Over 300 people attended the ceremony, which was conducted by local mayor Riccardo Marchesan, who was visibily moved.

The call for di Just’s resignation comes from Francesco Fragiacomo, the local parish priest, who has told the Archbishop of Gorizia, and stated in the church bulletin: “In church, every is welcome, but educational responsibilities require certain fundamental prerogatives, like how to share and believe in, with teaching and examples, the objectives of the Church in the various aspects of Christian life.

When it comes to family, the Church proclaims the grandiosity and beauty of matrimony between a man and a woman. As Christians we are called to proclaim Jesus’ model of the family.” When Antonio Iovane (Italian Radio Capital DJ) interviewed the priest, the latter deemed Di Just’s union to be not “in line with the Christian mission.”

The community of Scout leaders is taking refuge in silence. One manager of the group has commented: “For us, at this moment in time, Di Just has the placet [an affirmative vote in the Church] to continue as a Scout educator, but this must be confirmed with regional members, and so it is yet to be clarified. We have asked ourselves the same question. We’ll see if something changes.”