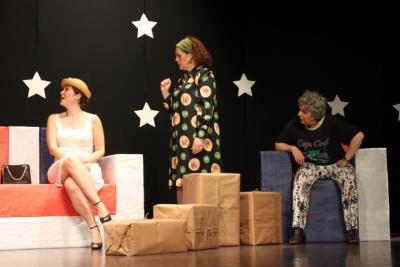 ROME— Americans are proud of their founding mottos of opportunity, equality and freedom, but what really lies at the heart of this American Dream when you delve beneath the surface? Edward Albee’s “The American Dream” and “The Sandbox” look to explore this, resulting in a harsh critique of 1960’s America, which is still pertinent today.

“The Sandbox” acts as a preface to “The American Dream”, though the two one-act plays are often performed together. They follow the story of an American couple living with the wife’s elderly mother, and expose the deep dark secrets of the supposedly squeaky-clean middle class.

The production of Albee’s work currently being staged at the Teatro San Genesio has a lot to offer. The cast is made up of actors from the companies “The Rome Savoyards” and “Plays in Rome,” who perform four plays together each year. It’s clear that the cast know each other really well, effortlessly bouncing off each other throughout the performance.

I especially enjoyed watching Mommy and Daddy’s relationship unfold. Carolyn Gougher and Rishad Noorani were convincing in their portrayal of a typical middle-class couple, with Noorani’s childlike mannerisms emphasising his emasculation at the hands of his domineering wife. Fabiana De Rose and Edoardo Camponeschi played into this dynamic well, probing the couple and exposing their flaws.

The stand out performance came from Shelagh Stuchbery, who played Grandma. She delivered her lines authoritatively, commanding the stage and holding the audience’s attention. Her body language and mannerisms were also spot-on, fitting the role of a cantankerous old granny perfectly.

Teatro San Eliseo is an intimate venue and suited the nature of the production well. The set was simplistic, but effective, and the actors interacted well with the limited props. Better use could’ve been made of lighting, as it stayed the same throughout almost all of the play.

“The American Dream” and “The Sandbox” are being performed at Teatro San Genesio all this week, at 20:30 Wednesday, Thursday and Friday night, and 17:30 Saturday and Sunday. Full price tickets are 15 euros, and reduced 10.

To make a booking or to find out more information telephone 3478248661 or email playsinrome@yahoo.com.

The theatre is in walking distance from Metro A stop, Lepanto.