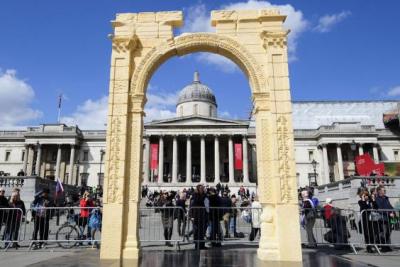 ARONA-- The 3D reconstruction of the Palmyra Arch of Triumph will be installed in Piazza San Graziano in Arona from April 29 until July 30, having previously been exhibited in London, New York, Dubai and Florence.

The inauguration ceremony will begin with a performance from the ‘Nuova Filarmonica Aronese’ followed by the singer songwriter Matilde Mirotti. Tenor Giorgio Casciarri and soprano Sara Cervasio, directed by maestro Paolo Beretta, will accompany the unveiling of the arch, which will take place at around 8:30pm.

At 9pm there will be an exciting light and music show, designed by the scenographer Sebastiano Romano, which will then be repeated on July 30.

Thousands of people are expected to visit Arona during the three-month installation of the arch, which has become a global symbol of cooperation and optimism in times of conflict.

The original structure, situated in archaeological site of Palmyra and dedicated to the Roman emperor Septimus Severus almost 2,000 years ago, was destroyed in October 2015 by a jihadi group. It was reconstructed to scale by the Oxford Institute for Digital Archaeology, with support from Torart, a Tuscan company.

“The structure has a strong symbolic value” commented Alberto Gusmeroli, mayor of the Commune of Arona “Passing through, moving forward wants to send out a positive message of continuity and peace and it’s an important example of how modern technology can serve culture to reconstruct lost pieces of history”.

Roger Michael, Executive Director of IDA, states “it is our hope that the arch, itself an icon of destruction and rebirth, will remind visitors of both the universality of suffering and the indomitable human capacity to rebuild what has been lost.”