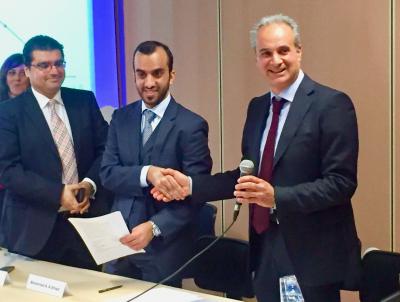 Mr. Al-Emadi and Dr. Pasqua celebrate the signing of the contract

RENDE— A ceremony has been held at the University of Calabria to celebrate the investment of Qatari businessman Mohammed Abdulla Al-Emadi in NanoSiliCal Devices, a spin-off specialising in cancer research founded by a team of scientists at the university.

NanoSiliCal Devices was established in 2014 by Dr. Luigi Pasqua, who developed the project with co-founders Prof. Antonella Leggio and Dr.Catia Morelli at the University of Calabria. The company primarily produces nanostructure drug delivery systems that can be used to create ‘smart anticancer therapies’ as a potential alternative to current chemotherapy treatments.

Established in 1972, The University of Calabria is a state-run university situated in Rende in the suburb of Cosenza. NanoSiliCal has based its experimental headquarters in the laboratories of the Department for Pharmacy, Health and Nutritional Sciences at the university.

Mr. Al-Emadi proudly told the Insider that his involvement in the project is the first Qatari investment in drug delivery technology and Friday's ceremony was to celebrate the landmark joint venture between the research team and the 27-year-old Qatari investor.

The devices themselves are called Mesoporous silica nanodevices (MSNs) and they essentially act as a vehicle for delivering the therapeutic agent into the cells of the patient. The revolutionary property of the MSNs is that they bear a targeting molecule, which selectively administers the drug only to the cells affected by the cancer, theoretically leaving the unaffected cells unharmed.

Dr Luigi Pasqua, CEO of NanoSiliCal Devices, explained to the Insider that the drug delivery system could be used as an “alternative” to current chemotherapy treatments.

“In our delivery systems the chemical agent is bonded to the internal part of the particle, so you can use the same chemical therapeutic agents that are used today in chemotherapy. Our devices will reach every tissue, as is usual with chemotherapy, but our device is able to select the cancer cell in which it releases the drug,” said Dr.Pasqua.

“The major advantages would be in the reduction of harmful side effects, lower levels of toxicity and the ability to prolong the treatment of the patient, as with normal chemotherapy there is a limit to how long you can administer the drug due to the high levels of toxicity,” he added.

The drug is entering the final stages of pre-clinical testing and thus far all the test results have been positive. The company has obtained a patent for European approval and is aiming to undergo clinical testing by the end of the year.

Mr. Al-Emadi was educated at Portland State University and graduated in 2012 with a Bachelor Degree in Economics. He took his expertise in business back to Qatar and is currently managing the Takaful insurance department at Qatar Cenral Bank.

Speaking in an exclusive interview with the Italian Insider, the newest shareholder in NanoSiliCal Devices, Mr. Al-Emadi, told the paper about his vision for the project and his patriotic reasons for investing in the drug delivery market.

Qatar is a country dominated by oil and gas investments but Mr Al-Emadi wants to buck the trend in order to try and further sustainable development in Qatar.

“In the future, we would like to open a facility in Doha so that the actual product would be made in Qatar, something which is very important for me,” added Mr. Al-Emadi.

He explained that many Qatari investors preferred to place their money in safer ventures such as real estate and the service and supply industries, but felt it was in the best of interests of his country to invest in a diverse field that could benefit not only Qatar but also change the way cancer is treated globally.

The amount of capital invested in drug development has suffered over recent years due to the high-risk nature of the industry, however, Mr. Al-Emadi is well informed on the potential risk of the project.

The Al-Emadi family is one of the oldest and most powerful families in Qatar, and their prominence in the business sector dates back to a clothes shop founded by Mr Al-Emadi’s great-grandfather in 1917. The family have undertaken investments in multiple fields such as seafood distribution, IT infrastructure and CCTV, as they now seek to prosper in the drug delivery sector.

Mr Al-Emadi was very grateful for all the support he had received from his family and country, “I would like to thank my father Mr Abdulla Mohammad Al-Emadi for his full support, emotionally and financially, year after year. I would also like to thank our Emir, H.H Sheikh Tamim bin Hamad Al Thani, for supporting the new generation to have a new vision for Qatar.”

Mr Al-Emadi also praised German consultancy firm, Ensymm, where he has been working with principal consultant, Dr. Pedram Dehdari, on a number of successful life science projects in recent years.

At the end of the year Mr Al-Emadi plans to undergo the next phases of his investment strategy with the possibility of increasing his investment in NanoSiliCal by up to dlrs 250,000. 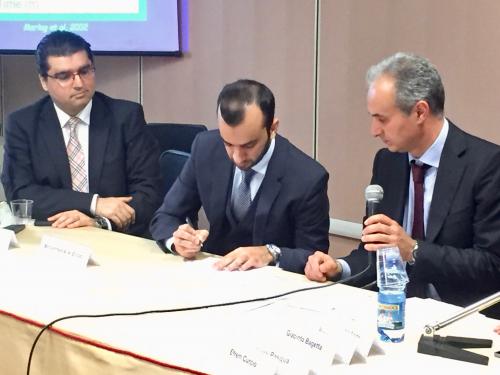 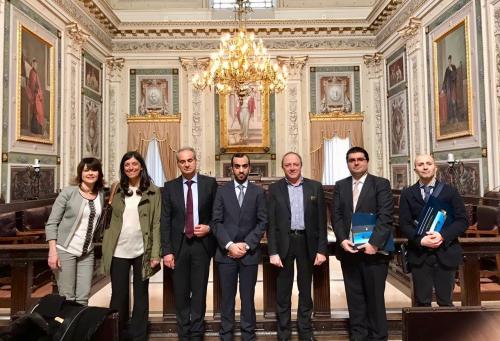