Knights of Malta called to reform ahead of leader election 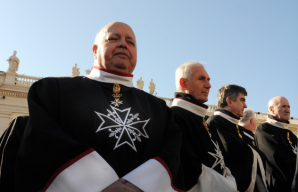 ROME-- Knights of Malta from across the world have been asked to help with Pope Francis’ reform of the ancient Catholic lay order ahead of a crucial gathering in Rome to elect a new leader.

But the plans for an overhaul come as the knights’ former Grand Master, Fra’ Matthew Festing, has hinted at a re-election bid, a move that sources in Rome say would throw the order on to a collision course once again with the Vatican.

Next month’s election takes place after a bruising public fallout between the order and the Holy See which led to the resignation of Festing and the appointment by the Pope of a personal delegate to assist with a “spiritual and moral” renewal of the knights.

Archbishop Giovanni Becciu, a senior official in the Secretariat of State and Francis’ point man with the 800-year-old order, has, along with the knights’ acting leader, asked all members to send proposed changes by the end of this month.

“The aim of the order’s reform, wished for by the Holy Father, is that of consolidating and prolonging its distinguished heritage of faith and of spirituality and for this reason we would like to begin a study which lays the groundwork for open and constructive dialogue,” Archbishop Becciu and Fra’ Ludwig Hoffmann-Rumerstein write in their letter dated 6 March 2017 and seen by The Tablet.

“We are now asking for your invaluable contribution so as to rough out the current state of the order, highlighting its strong points, its possible areas of weakness and the updates which you think need to be implemented,” they write.

The letter continues: “it would be equally opportune to gather all valid suggestions as to how the relationship between each member of the order and the Church can be made more effective whilst remaining loyal to the magisterium and in full observance of Catholic doctrine. Finally, it would also be beneficial to collect concrete suggestions as to how greater impetus can be given to charitable service to the most needy, both on a spiritual and a material level.”

Yet, just days after the letter was sent, Festing gave an interview with the Catholic Herald revealing that the Pope had told him he could be re-elected as Grand Master.

“I said, ‘Can I ask you a hypothetical question?’ [The Pope] said yes,” Festing told the Herald. “And I said, ‘Hypothetically, what would happen if I was re-elected?’ He thought for a moment, and said, well, that would be all right.”

He added: "I am currently very happily in Northumberland enjoying a quiet, prayerful existence away from Rome, and I have no intention of campaigning to be re-elected. However if they re-elect me, I would have to consider agreeing to it."

A 67-year-old former Sotheby’s executive, Festing became only the second Englishman to lead the 11th century crusader-era knights, when he was elected in 2008, and despite his resignation there is nothing in the knights’ rules preventing him from coming back.

Sources in Rome say, however, that such a move would go down very badly with the Vatican given that he was asked to step down by the Pope following a Holy See inquiry into the sacking of Albrecht von Boeselager, who was dismissed as the order's foreign minister after being accused of allowing the distribution of condoms in Myanmar and parts of Africa.

“It is very clear that in the end the order has an umbilical cord with the Vatican. The sovereignty is meaningless if that is severed,” a source in Rome said. “The order’s claim to sovereignty is grounded in the Pope.”

The source said it was a “fantasy to think the order has a future without the Vatican” and that the re-election of Festing would be an act of defiance that could put the future of the knights in doubt.

“I hope reason will prevail,” the source said. “Why? Because the Holy See will not tolerate this.”

At the time, the dismissal of von Boeselager was backed by the order’s patron, Cardinal Raymond Burke, who said the sacking was the wish of the Holy See, something the Vatican disputed with letters revealing that Francis called for the matter to be resolved by dialogue rather than sacking anyone.

During the saga, Festing and his leadership team engaged in a public showdown with the Vatican by accusing the Pope of an unwarranted interference into the knights’ internal affairs. The order has a dual character as both an autonomous, sovereign entity and as a religious order with members who take vows, including one promising to obey the Pope.

Cardinal Burke's involvement also turned the dispute into a proxy war between the Pope's reform programme and his opponents. The cardinal has been a leading critic of the pope and is threatening to issue a highly unusual formal correction of the Pope's suggested move to give communion to divorced and remarried Catholics.

Following the resignation of its Grand Master, Francis stressed the sovereignty of the ancient order, something which gives it diplomatic relations with over a 100 countries and permanent observer status at the United Nations. But insiders believe the sovereignty should support the order’s charitable aims such as providing emergency aid in war-zones like Syria rather than allowing a minority to enjoy the costumes and status of historical privileges. For the Grand Master these privileges include living in a palace on Rome’s fashion high street, the Via Condotti, being treated like a head of state and addressed as “His Most Eminent Highness.”

The order is currently riven with internal disagreements about its future with some wanting to push for a stronger focus on charitable work and stronger governance structures, while others keen to stress the knights' religious, spiritual aspect in order to avoid becoming a "spiritual NGO."

Tensions will be running high on 29 April when the order’s "council complete of state" gathers in Rome for a conclave-style election for a new Grand Master, with the Holy See having no power to accept or reject the successful candidate - they are simply informed of the choice. Sources inside the order stress that a likely outcome is that an interim head will be chosen, a figure who would be given a year to bring in reforms.

These could include the scrapping of the requirement that the Grand Master must be able to demonstrate 300 years of noble ancestry while introducing an age limit for the post holder: there are just 12 knights eligible to be the new leader, with one of them aged 97-years-old. There is also a plan to make the Grand Master less of a monarchical figure and implement changes that ensure a more consultive method of governing.

But these changes will take time and a new leader is needed first. Next month’s electors are made up of around 60 members with two thirds, according to the order’s code, coming from the ranks of the fully professed knights who have taken vows of poverty, obedience and chastity.

This could benefit Festing who during his leadership sought to boost numbers of the quasi-monastic “first class” members saying in his recent Catholic Herald interview: “If you don’t have the professed knights, you just become a sort of religious club.” These members of the order number just 55 out of around 13,000 knights and dames.

Von Boeselager, who has now been re-instated to his old position, is a “second class” knight meaning he could not be elected Grand Master. He is, however, a member of the order’s governing “sovereign council” and therefore has a vote in the election.

During the process, the professed knights compile a list of three possible candidates to choose from, with the new Grand Master needing a simply majority in to be elected. The order’s code states that after “the fifth undecided ballot” the council can then decide to proceed to an election of an interim leader known as the “Lieutenant of the Grand Master.”

Festing says he is concerned that the order has been in the headlines for the wrong reasons, leading to a distraction from all the good works the knights carry out, something he has personally been involved with for many years.

Nevertheless, next month’s gathering has the potential to re-ignite the battle between the order and the Pope, and push the focus back onto internal politics and away from its charitable endeavours.

This article first appeared on The Tablet