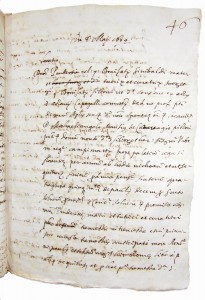 ROME– Just after the closure of the successful Caravaggio exhibition held at the Scuderie del Quirinale that celebrated the 400th anniversary of the artist’s death, Rome will play host to another of Michelangelo Merisi’s exhibitions.

“Caravaggio a Roma. Una vita dal vero” is the synthesis of a collaboration between the Ministry for Culture and the Rome State Archives resulting in what could be major turmoil for Caravaggio experts and for art lovers in general.  The archives contain more than half of the world’s antique documents and provide an endless source for new historical discoveries, according to Eugenio Lo Sardo, director of the Rome state archives, who gave the opening address at the exhibition presentation.

A team of art historians, palaeographers, archivists and historians dug through the 60 km of shelves that make up the Rome State Archives in search of previously unknown documents that could help to shed light on aspects of Caravaggio’s life.  Three unpublished documents were found and, as Lo Sardo told the Italian Insider, “the names found on such documents led to further research and new discoveries of unquestionable value.”

More details have emerged on the famous Biagio process that saw Caravaggio accused in a libel suit after dismissing his rival’s work in a heated verse poem.“Caravaggio a Roma. Una vita dal vero” will be held at Sant’ lvo alla Sapienza, right next to Palazzo Madama were Caravaggio lived under the patronage of the Cardinal del Monte, until the 15 of May. The exhibition has the stated intention of been a “detective story” guiding the visitor, step by step , into Caravaggio’s personal life showing how aspects of his everyday living, in the Rome of the Counter Reformation, deeply affected the paintings we admire today.

We are now in possession of the house contract, signed by Caravaggio, which shows how the artists had been granted permission to dismantle his ceiling. As Professor Strinati, an art historian of the Ministry of Culture said, “this is just more than mere gossip because we are able to understand the lighting system that Caravaggio used for his paintings”.

Having identified the house as one in Vicolo della Scrofa in Rome, the researchers found a small window of the roof which is precisely the one used in Caravaggio’s painting Morte della Vergine. Had Caravaggio not been able to tear down that ceiling we would not be able to admire the painting as we know it today.

Perhaps the most important document found is the testimony of Pietropaolo Pellegrini, the apprentice of a Barber Shop close to the art studio where Caravaggio started working when he first came to Rome. Pellegrini’s unpublished testimony permits art historians to finally give a secure date to Caravaggio’s arrival to Rome around the age of 25 and not the age of 19 or 22 as previously thought.

Such a date of arrival prompts a whole series of new questions regarding Caravaggio’s life. It is accepted as fact that the artist left Milan in 1592 after completing his studies, but since he is now attested to have arrived in Rome in 1596, art historians are already begun debating exactly what the young artist did at that time.

The debate is already heating up among experts backing contrasting views. Did he go to Venice? Was he in Flanders? Or, given Caravaggio’s propensity to question authority and the historical certainty that he was leaving Milan was due to problems with the law, was he held in prison?

It is hard to answer all the questions pertaining to the life of an artist whose tendency to flee towns and subvert authority has been bequeathed to us throughout history. Nonetheless, “Caravaggio a Roma” provides some new answers and opens up many more questions making a visit to the exhibition an absolute must for art lovers.