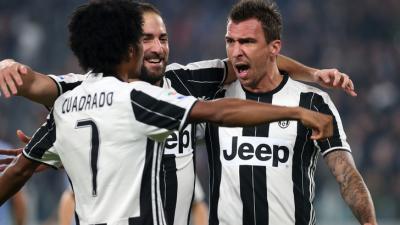 The dream of a Juventus treble lives on

ROME—Juventus cruised past Porto, 1-0 (3-0 agg.), to seal their place in the quarter-finals of the Champions League. Paola Dybala’s drilled first half penalty was enough to register another victory against the lacklustre Portuguese outfit.

The home side have not been beaten at the J-Stadium since August 2015 and Tuesday night’s result extends their streak to 21 home games unbeaten in European competitions.

Porto knew they were travelling to Turin with the odds heavily stacked against them.  Goals from Marko Pjaca and Dani Alves in the first-leg in Portugal meant the Bianconeri were firmly in control of the tie.

However, the return fixture could scarcely have been more comfortable for the hosts. When Dybala converted a penalty after Maxi Pereira was sent off for handling the ball in the area, the Italian side barely broke a sweat as they coasted towards the final whistle.

In a game that lacked action, Massimo Allegri’s side completely dictated the tempo and held 68 percent of second-half possession. It was evident that hope had faded among the Porto players as they began to accept their chances of progression were over.

The result means that home side’s bid for a Champions League, Serie A and Coppa Italia treble is very much alive. The reigning Serie A champions are currently 8 points ahead of Roma as they look to earn their sixth successive domestic title. They also hold a 3-1 lead over Napoli going into their second-leg semi final tie in the Coppa Italia on April 4.

It will be all smiles at the Juventus Stadium if they can emulate their fine domestic record in the latter stages of the Champions League.

Surprisingly, legendary goalkeeper Gigi Buffon told the press that his side want to “avoid Leciester” in Friday’s quarter-final draw.

“They are a difficult team to face, with so much enthusiasm and against them you have everything to lose”, said Buffon.

Whoever it is they may face, Juventus, the last Italian side remaining in the competition, will be hoping they can continue their majestic home form as their search for Champions League success goes on.