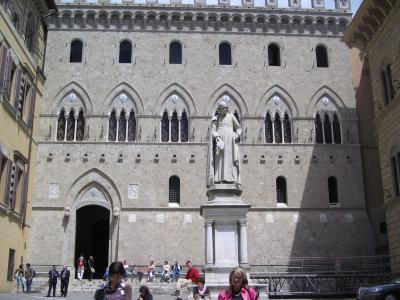 The first Monte dei Paschi was born in 1624, descendant of Monte di Pietà, established in 1472

ROME --The ongoing eurozone crisis is putting an unexpected squeeze on The Monte dei Paschi Bank, an institution that was set up to protect the needy from usurers and that has been run with admirable caution and social conscience for more than five centuries.

The Monte dei Paschi di Siena SpA, Italy's third-largest lender, needs to raise around 3 billion in fresh capital to compensate for its exposure to Italian sovereign debt and satisfy the stress test demands of the European Banking Authority.

Seen for years as a kind of 'Father Christmas' for Siena and the surrounding region, the crisis has forced the bank's controlling Monte dei Paschi Foundation to cut back sharply on its charitable disbursements.

Three years ago the bank handed out charitable donations worth 230 million, including about 25 million to the medieval hilltop city where it has its headquarters.

Last year it reduced the figure to 100 million, which went to causes as ancient as the traditional Palio horserace and as modern as neurological research and fibre-optic cables.

Other donations included 15,000 for a farm community for autistic adults, 20,000 for cultural centres in Havana, 5,000 for the improvement of local mule tracks and 3,000 for a baroque music festival in San Gimignano.

The choices reflect the interests of the left-wing politicians who control the Foundation. This year there will be half as much money to hand out.

The bank's problems stem in part from a determination to keep control of the bank local, in part from an unwise cash purchase of the Banca Antonveneta for 9 billion in 2007 and in part from those troublesome Italian government bonds.

Until recently Italian bonds were seen as a conservative investment, but today the bank's pile of 32 billion worth of bonds is seen as an alarmingly high multiple of its 7 billion capital cushion.

Instead of selling shares in the bank to raise capital, the Monte dei Paschi sought a $600 million loan from financial institutions in the United States.

It has been forced to sell shares in any case, and the plummeting share price in turn has forced it to increase the number of shares provided as collateral to J.P. Morgan and Goldman Sachs.

Writing in the online newspaper www.giornalettismo.com Tommaso Caldarelli compared the approach of the bank's political controllers to that of the Northern League: always fiercely protective of local interests.

The Monte dei Paschi had attempted a 'League-style banking experiment in red sauce', Caldarelli commented, "given the well-known contacts between Siena's centre-left establishment and the bank's board.".

If things go seriously awry, the bank may no longer be controlled by administrators prepared to put mule tracks and Palio horses ahead of less sentimental financial considerations. London-based HSBC is one of the international banking behemoths currently cited as a potential saviour for the ancient Tuscan institution.

Founded in 1472 as a Monte di Pieta, a charitable institution providing loans in exchange for objects left in pawn, its charter specified that it was to serve "poor, miserable and needy persons," charging the lowest possible interest.

In its heyday it enjoyed considerable power. In 1622 it was able to sentence a dishonest employee to death, offering 200 scudos to anyone who killed the miscreant and double the amount if he was captured alive.

A TV advertisement filmed by Giuseppe Tornatore shows the bank's engagement with the ancient and modern aspects of Italian life. The sound-track is a Paolo Conte song called "The Raincoats."

It would be particularly unfortunate if the Monte dedicated to serving the "miserable and the needy“ proved unable to provide its customers with a financial umbrella, or a raincoat, to protect them from the squalls gathering on the European horizon.