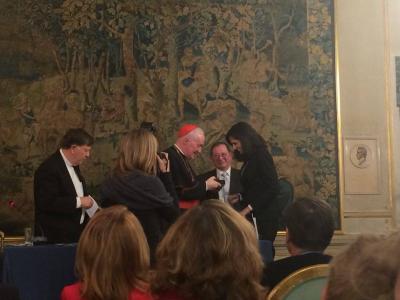 ROME -- The Spaniard Izara Batres Cueva (Madrid, 1982) was awarded the Fernando Rielo Worldwide Mystical Poetry Prize for her collection of poetry entitled ‘Triptych,’ announced Wednesday in the prize-giving ceremony at the Spanish Embassy to the Holy See.

Izara Batres Cueva was awarded 7,000 euros of prize money, as well as the publication of her winning poetry collection, and a commemorative medal, in the 36th edition of the award, Wednesday.

The winner holds a doctorate from Madrid’s Complutense University, has published five books and poetic anthologies, including works that have already received several literary prizes. She is currently a university Professor of Creative Writing, and also of Language and Literature in Madrid.

According to the prize’s jury, “her work transfigures the experience of suffering, using steely poetic language, free of useless expression, bare and transparent, to convert it into the channel of encounter with a God to whom the poet clings feverishly.”

“Her lyrical voice maintains a firm, forceful, sincere tone, without falling into either uprooted lament or despair, because the maceration of the suffering is transformed into imploring and trusting expressions of love” -- “I feel your hand, blue and sweet, over my wound.”

In the end, the tenderness of love overwhelms the suffering, the purification in pure ecstasy of lights: “I look for the heaven of your virtue in the dazzling tenderness / of the springtime / that is born in your hands.” It makes us partakers also of inspiration in the intimate experience of grace: “I know that God is dictating my verses, / I know that you are here / and beyond this body and this pulse, the bond imposes its meaning, / I feel you in the soul.”

The event was topped with a violin duet concert by Marco Fiorini and Biancamaria Rapaccini, members of the Quartetto di Roma, with a repertoire of Jean Marie Leclair, Henryk Wieniawski and Louis Spohr.

The need for poetry in today's world, and for mystical poetry in particular, was expressed by Fernando Rielo in a speech at UNESCO in 1985: "Poetry is a form of a culture that passes through an upright, incorruptible spirituality; deprived of this passage, it cannot give us the fruit of peace. (...) culture is wisdom that elevates the intuitions of life to a system. Its language, poetry; its fruit, peace."

Thanks to the ecumenical character of the prize, it has been obtained by poets of different Christian confessions, in fact the majority, but also non-Christian, a demonstration of the capacity of mystical poetry to unite cultures and religions.

Fragment of the poem ‘Triptych’ (translated from Spanish)

Mother, they hurt me in you,

the light broke against the background of silence,

and your creation of tenderness

flew towards the void of pain

caught fire in the letters.

Mother, they damaged the firmness of the embrace,

the quietude of heaven,

and a tear of the sweet breeze in the voice

that broke without making a sound;

the sublime gaze drowned its impact,

and the darkness tore

the last sweet vaults of the Earth.

I wanted to break the thread by thinking of you, Mother,

crying for you and in you,

living in your love to heal the wound,

and in silence, very slowly,

remembering how the light was

when I knew who it was,

I called you, once again.

Yesterday I asked myself how I had reached here.

I have come to dream voyages.

But hadn’t I done it before?

Hadn’t I been enchanted by these very same streets

that extend to the infinite?

Hadn’t I felt pity for this sweet asphalt

that wants to rise above the void?

Many flights were only half done.

The shadows swim over the memory of a sun

that died in winter,

but could not have stopped being,

but constantly hurts, and rips and screams,

I believe that I got lost here…

amid streets that sink in the slavery of the waters

and that river that wanted to be something more than pool.

Tell me, Father, will I be able to reach you?

The springtime sings along the avenues,

And still I cannot fly. 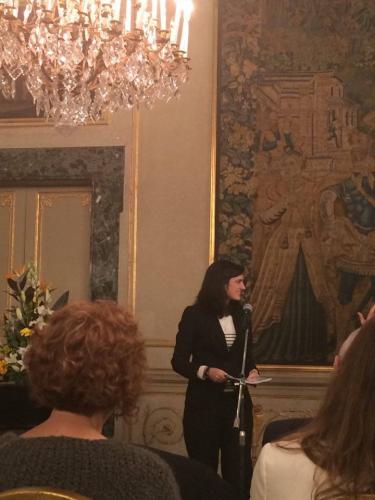 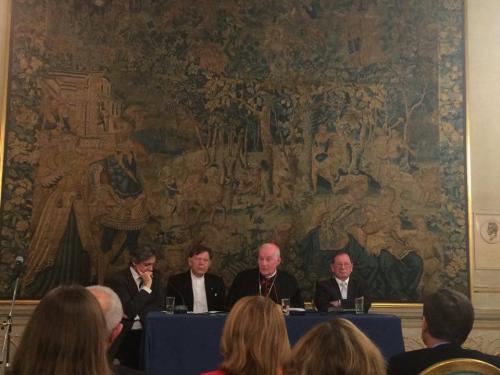 The speakers at the event
Culture
Rome
World
Italy