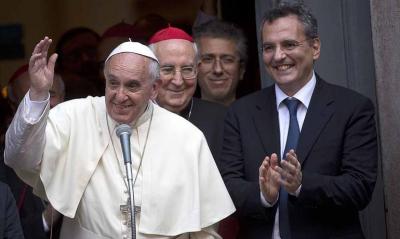 Sant'Egidio becomes a permanent observer in the International Organization for Migration

ROME -- The Catholic community of Sant’Egidio has become a permanent observer within the International Organization for Migration (IOM) Council, the community said Tuesday.

The 107th IOM council opened Monday in Geneva, for which the Rome-based international religious community Sant’Egidio has been given a formal status of observer.

The council, the first since the IOM became part of the United Nations system, was organized in the occasion of the 65th anniversary of the founding of the IOM, and approved a further increase in member states -- now counting 166 -- as well as of observational members

The validation of Sant’Egidio’s new status within the heart of the IOM council was accompanied by a Memorandum of Understanding that was signed Tuesday in Geneva by the Director General of the IOM William Lacy Swing, and by the Secretary General of the Sant’Egidio Community Giacomo Zucconi.

“After years of collaboration with the Sant’Egidio Community, we are happy that this collaboration between us can enter a new phase,” said Federico Soda, the Director of the IOM’s Coordination Office for the Mediterranean.

“The Memorandum of Understanding defines a few important areas of cooperation between the two organizations, with a particular focus on the promotion of legal channels of entry for migrants and refugees -- between which a strengthening of family reunification projects -- and it underlines the necessity for opening humanitarian corridors for migrants who find themselves in emergency situations. The document also highlights the importance of striking collaborations with the migrants’ and refugees’ countries of origin,” Soda continued.

Both Sant’Egidio and the IOM have carried out extensive resettlement and relocation projects as well as humanitarian corridor initiatives, both in Italy and abroad -- thus this “signing of the Memorandum comes within a political framework of humanitarian collaborations that had already been consolidated, and we hope that this can help launch new initiatives that will be able to offer help and support to a greater number of migrants and refugees,” Soda concluded.