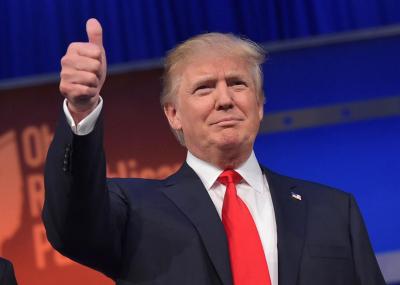 CUZCO -- From the city of Cuzco, where the Inca culture was subjugated by the Spanish conqueror, I am watching how the world inexorably leads to a different measure of history. And given the impossibility of drafting a complete analysis, these are some of my scattered observations.

But first we need to make an introduction. In any country of the world, Hillary Clinton would have won the elections after obtaining the greater number of votes. The United States, however, does not have a democratic Constitution. And while the Americans consider themselves the “only democracy in the world” (George W. Bush, speech to the U.S. Congress at his inauguration), it should be noted that the US Constitution is a vestige of the past. See why …

When the different states emerged victorious from the War of Independence against England and decided to unite in the United States, the smaller states feared being subjected to the greatest. That was how a guaranteed commitment was invented.

And so, the Senate, as the main organ of the legal system, is composed of two senators for each state. Thus Wyoming, which has 800,000 voters, has two senators, just like California that has 27 million.

The president is elected by “electoral votes” which are given to each state based on similar considerations. Thus, Al Gore, who had won the majority of votes, lost the elections to George W. Bush by electoral votes (aided by the Republican Supreme Court that gave Florida to Bush).

This time the same thing happened: in the less developed states voting Republican (with the exception of Texas and a few others), the majority of the Senate can be obtained by adding the 26 states with less population and development, thus prevailing over the population of 24 states that are industrialised.

But there are other anti-democratic rules in the US Constitution, such as the fact that when a senator dies, it is the governor who names his or her replacement. Thus, a Republican governor can appoint a Republican senator, even if the dead one were Democratic …

Let us now return to observations.

The first observation is the fact that practically all observers, polls, and the media (with very few the exceptions) gave Clinton as the winner, this being a signal of the gap between the system and reality.

The same thing happened with the Brexit, with the Austrian elections, and in the Philippines …

The explanation is simple: we frequent our friends, a society is made up of parallel concentric circles, and we believe that the observation of a university professor has more value than that of an unemployed worker. Therefore, we do not have a complete view of the society in which we live.

Now the second observation. The victims of the economic and social process created by the vision of a self-destructive capitalism that rewards very few while frustrating the hopes of many, are far more numerous than those who do not. And they are victims who see every day examples of corruption, waste and wealth, this leading them to have passions, not opinions.

After spending 4 trillion dollars (according to the most modest estimates) to save the banks (which still have 800 billion toxic assets), the priority is of keeping looking after the financial sector instead of the social expenses that are publicly considered unproductive, is seen differently by those who are inside and others who are outside.

They (the victims) are also aware of the fact that banks, in the crisis of 2008 (which we has not gone yet) have paid fines worth 280 billion dollars (not counting the Deutsche Bank pending 14.5 billion).

The fact that the total subsidies for youth employment in OECD countries is just over 20 billion dollars, while the European Central Bank gives 80 billion a month to the banking system (which do not pass into the productive system but is invested in the financial sector), certainly does not help young people to feel part of Europe.

Who has heard, in the political debate, the terms solidarity, social justice, participation, equity?

Is there somewhere in politics, a debate about how to increase employment that is threatened by the use of robots, which will constitute 40 per cent of industrial production in 20 years?

Or how corruption is increasingly perceived by citizens, and urgently needs to be addressed? Or on whether those who voted for Brexit and Trump can feel represented or not?

This leads to the third observation. Politics is now subject to finance, devoid of visions and ideals that were discarded for the purpose of ideologies.

It should not be overlooked that the number of citizens who say that the left and right have disappeared, has reached unprecedented rates. Politics, as a reaction, closes like an oyster and becomes increasingly self-referential.

Who is the citizen who sees in a party a space of participation and expression, apart from those who are inside, as was the case in the times of the youth of the parties? This decline in participation is a serious element of the crisis of democracy.

At the same time, it is clear in the eyes of all, who are the Le Pen, the Farage, the Salvini, etc. It is clear to all that nationalism, populism and xenophobia are returning. These are the classic indicators of the crisis. The thirties are a chapter to remember …

Will politics have the ability to find its way, ideals and visions, where listening to citizens be part of a common design? There is not much time left …

Now the fourth observation. We now have the president of the world leader, the United States, who clearly states that they are not interested in the world except to the extent that it serves American interests.

Multilateralism, from the European Union to the United Nations, has been in a growing crisis since Ronald Reagan and Margaret Thatcher in 1981 declared that they do not believe in international cooperation and that each country should stand on its own.

This line continued with ups and downs, but with a continuous trend. It is no secret that when it came to electing new UN Secretary-General, the question of the President of the United States was: who is the weakest one of all?

President Barack Obama tried to reverse this trend. But his people (rather, a part of this that no one had seen so far) do not see it this way.

Do not forget that the same battle was made by Bernie Sanders, who won 10 million votes. If he had been able to run, we would have seen how the Americans would go to judge two ways– one of which is to declare oneself socialist represents a novelty as radical as that of having chosen Trump. This happens in a country where the term socialist is like declaring oneself an alien to the United States, and dangerous.

Now we have the country-leader completely heterogeneous with respect to the existing international relations. Will Europe learn how to hear its own voice? If it does not do it now, when then will it be able to do it? Will international cooperation, multilateralism, and development plans be given a space again?

The fifth observation is a banality. The Chinese use the word crisis also in the sense of opportunity. We are going to have, at least four years, (Putin, Grillo, Le Pen …) a government for an unpredictable moment. Trump is a politician of viscera not of brain–the classic incarnation of what is called an unpredictable politician.

But above all, he does not listen to advice. He is also a prisoner of his own electorate. Certainly, the system will try to harness him as it can. But it happens that all the cards we know are now in the air.

This also means that it is possible to make innovative policies, which the previous rusty framework did not allow. Also because it would be difficult to see what common policy Trump may have, with May, with Farage or the AFD …

The populist parties have never been able to create a common policy, for example in the European Parliament. They only have common enemies, but no homogeneous alternative plans. So, now that the cards are in the air, there would be a space to invent and build upon.

But this cannot be done without recognisingthat we are in a political and democratic crisis, a crisis of society and perspectives, which, if not assumed and metabolised by the political class in power, will see a successive collapse of the system, and that the current crisis (which will not be solved by populism nor nationalism) will end up making any governance impossible.

Here, I feel compelled to add one last point. For those who have worked throughout their lives to create awareness and participation—the civil society was the force that rebalanced the crisis of values and policies.

If there is an issue that civil society has defended since its birth, this is gender. One difference between a young person today and my generation is that the issue of women did not exist then, while young people today are fully aware of it.

It is an issue that is present in the media, in politics, in culture, in organisations, from industry to business, from politics to administrative and cultural.

Well, after all what Trump has said and done on the issue of women, reactivating a machismo barracks that were already considered unacceptable … after the declarations and demonstrations of all women’s organisations in the artistic, cultural and economic sectors… 53 per cent of American women voted for Trump.

This percentage is not far from that of the male electorate. It happened in Italy with Silvio Berlusconi, that organiser of parties with minors who spoke openly of the woman like an object of use, so much that his wife had to leave him.

This vote is a blow to all civil society, and for all those who compromise because they are convinced that creating awareness is possible a better world. We have lost a major battle, and the war is now much more difficult.