Grillo says Trump win is a 'general f*** you' 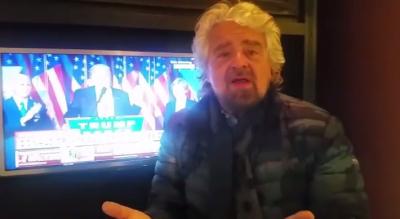 Beppe Grillo records a video commenting on US election result

ROME -- Leader of the Italian Five Star Movement and comic Beppe Grillo has published a video on his blog Wednesday, commenting on the result of the US election and likening the Trump phenomenon to his own protest party.

Opposition party leader Beppe Grillo has defined the Republican hotel magnate’s win as “a general f*** you and the apocalypse of information,” while Lega Nord politician Matteo Salvini has said that we are living “a historic day” in the face of all the “journalists and political analysts,” and Prime Minister Matteo Renzi tried to give guarantees about cooperation between the two countries, writes Il Fatto Quotidiano.

For Grillo it is the apocalypse of the system and a sign of what will happen when the Five Star Movement wins. The M5S mayor Virginia Raggi has even invited the Republican president to the Campidoglio -- “I wish him good luck in his work and we will call him here,” said Raggi.

The protest party leader decided to make a video and publish it on his blog -- “it is mad. This is the explosion of an era. It is the apocalypse of information, of the television, of big newspapers, of intellectuals, of journalists. This is a general f*** you. Trump has created an insane V-Day,” he said referring to his own political initiative, Vaffanculo day (F*** you day) dating back to 2007 around various Italian and foreign cities to gather support for modifications to parliament and election laws.

“This is the proof that these millions of demagogues are not the people, but are journalists and intellectuals, anchored to a world that no longer exists. We saw it with our Movement. There are similarities between this American story and our Movement. We were born and they did not realize, because we have an outdated journalistic system that only understands when something has already happened and it is already too late.”

“We became the leading political Movement in Italy and they did not realize, they are realizing now and now they are asking why. We will start to govern and they will ask ‘but how did they get here? They harnessed the anger etc. etc.,’” Grillo continued.

According to the former comedian, there is a similarity between the way in which the M5S is treated and the way in which the Trump phenomenon was managed. “The big media associations have said similar things about Trump to what they say about our Movement. Do you remember? They said that we were sexist, homophobic, demagogic, populist. They do not realize that now millions of people do not read their newspapers and do not watch their tv.”

“Trump has ridden on that wave. He reached out to millions and millions of people. There was a huge electoral turnout in the US. This means that people are beyond outdated information. These are equipped and are equipping themselves to manage a world that no longer exists.”

For the Five Star Movement’s leader, whoever goes against the media is a “hero” -- “The true heroes are us! Heroes who experiment, who unite the misfits and the unsuccessful. Because failure is poetry. Honda said -- ‘my life is made up of failures.’ But it is those who dare, the obstinate, the barbarians, who will carry the world forward. And we are barabrians!”

“And the true imbeciles, populists and demagogues are journalists and intellectuals of the system, serving the big powers. Trump has screwed over all of them -- Freemasons, huge banking groups, the Chinese. He might even now become a moderate. I can see him now saying, ‘yes, I said it, but it was during the election campaign etc.’ But the world has already changed. And these signs must be interpreted. And those who work and take money for interpreting these signs are dead.”