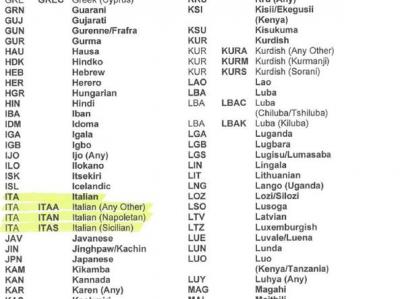 The categorisation is seen to be prejudiced

LONDON -- Registration forms at some British schools made a distinction between Italian students of Sicilian, Neapolitan or 'standard-Italian' origin, causing outrage as the Italian Ambassador in London reiterated that Italy has been unified since 1861.

Select schools in England and Wales imposed a simple question for those Italian students who wished to register – “Italian, Italian-Sicilian or Italian-Neapolitan?”

The thought-process behind the question was apparently with good intentions to “avoid discrimination”, referring to particular linguistic differences between the regions, La Stampa reports.

The registration forms were publicised online and within days sparked uproar and protests from Italian families living in Britain (originating from both Sicily and Naples, and indeed from all over Italy!).

Pasquale Terracciano, Ambassador in London, addressed the Foreign Office stating, “we have been a unified country since 1861 -- the question is offensive.”

Initially, the response was just a few disgruntled parents, surprised to see a question which has not needed to be raised since more than a century ago. The news then spread across the Internet, despite many originally believing it to be a joke.

The Ambassador has asked for immediate removal of the question, which he believes in reality has nothing to do with regional cultural or linguistic differences. The Foreign Office has promised to correct the forms and avoid any questions which could cause offense.

David Faraone, Deputy Education Minister, claims “It is unbelievable that still nowadays we have to confront prejudice of this type. The Italian schooling system has risen above these stereotypes for some time now -- we must all, including in the United Kingdom, work towards the integration and development of future generations.”