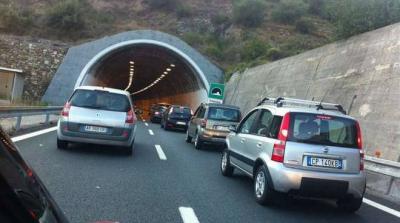 VENTIMIGLIA -- The death of a 17-year-old Eritrean girl hit while trying to reach France at night walking along the motorway from Liguria, has underlined the extent that migrants will risk their lives to get into France rather than pay extortionate smuggling gangs controlling many illegal routes, observers reflect Monday.

The death of this young migrant girl Saturday in a tunnel on the A10 motorway linking the Bel Paese to France caused Italy watchers to reflect on the fate of so many migrants like her attempting this journey.

Many migrants who manage to reach the Italian city of Ventimiglia see it only as a stopover in their longer journey to other northern-European countries. From this city, there is a hidden internal network in place to attempt to traffic migrants into France.

Huge numbers of these immigrants, over the past two years, have tried to pass through but few actually make it -- many die on the way like the Eritrean girl, hence the name given to the motorway by the French, ‘La route e la mort.’

This ‘route’ is made up of many different roads -- the motorway, one of the most dangerous, along which Maghreb drivers attempt to take groups of migrants. There is also the railroad, where drivers of train convoys are forced to run on sight to avoid harming migrants that attempt that alternative.

Then there are the smaller rocky paths along which the African people smugglers lead migrants, by foot, with only the light of the stars to guide them across the rocks. Finally, there is the ‘Il Col de mort’ were, according to police, so many have died over the past few years -- every so often someone would slip and fall down with their body found later, many times by tourists.

The migrant smugglers charge from 200 to 250 euros per person to be taken through ‘La route de la mort.’ With the clandestine smuggling network in place, there are people to ‘welcome’ the migrants in Ventimiglia and tell them who to go to in order to be taken across to France.

The Italian border police say that the smugglers “are able to load up small vans with up to 25 people. These smugglers are generally well-integrated north Africans, often French citizens, but you can also find Bulgarians, Pakistani and Albanese smugglers.”

“Afghan smugglers tend to lead migrants only across smaller paths, the others take them in cars or show them the route to get to the A10,” said the police.

According to investigative sources, those who greet the migrants in Ventimiglia are charged with the task of “collecting bookings in the station,” and determined by the price agreed upon, they decide if their ‘customers’ are to be taken “across the motorway, the paths or in a van.”

If they are not able to pay the money, the only alternative is for the migrants to try by themselves along the A10 -- alone, by night, all too aware of the imminent risk of death.