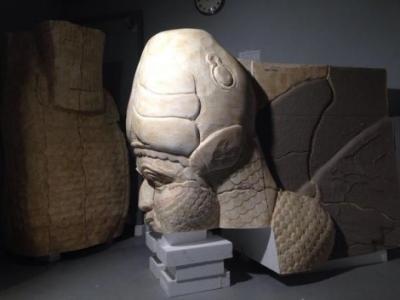 3D printed reconstruction of the human-headed bull at Nimrud

ROME -- Monuments destroyed by ISIS have been brought back to life in the Bel Paese, where they will be displayed in a new exhibition Oct. 7 in the capital’s Colosseum entitled, "Rinascere dalle distruzioni" -- “Rising from Destruction - Ebla-Nimrud-Palmira,” the exhibition team said Thursday.

The human-headed bull at Nimrud site no longer exists. It got crushed. There is nothing left of the ceiling of the Temple of Bel at Palmyra but a heap of rubble. The Royal Archives at Ebla which housed 17,000 cuneiform tablets, is now in a serious state of neglect.

Thanks to an outstanding 3D reconstruction work on scale 1:1 made in Italy, these three monuments have been restored to new life and will be on display at the Colosseum – from October 7 to December 11, 2016 – as part of the exhibition “Rising from the ashes. Ebla, Nimrud, Palmira”.

These three major masterpieces destroyed, damaged or debased by wars and iconoclastic fury in the near East will be standing up again in front of the millions of people visiting the Colosseum. The aim is to raise the international public awareness about the importance of promoting knowledge, culture and protection of sites and monuments, which are the heritage of humanity. A way to also promote the debate on the reconstruction of what was destroyed and on the restoration of what remains.

The exhibition, which is under the sponsorship of Unesco, was conceived and curated by Francesco Rutelli and Paolo Matthiae with the commitment of the Association Incontro di Civiltà and key support of the Fondazione Terzo Pilastro – Italia e Mediterraneo, promoted and carried out by the Soprintendenza Speciale per Il Colosseo e l’Area archeologica centrale di Roma, with Electa. The significance of the exhibition, which goes beyond the cultural sphere, is highlighted by President of the Republic Sergio Mattarella attending the preview, in the presence of Minister for Cultural Heritage and Activities and Tourism Dario Franceschini.

The reconstruction of these monuments was possible thanks to the highly qualified and specialized work of three Italian companies, with the use of innovative technologies and is a sensational evidence of the existence of ancient civilizations in the Middle East and of their deep cultural relationship with the Mediterranean. The whole work was carried out under the guidance of a scientific committee of archaeologists and art historians.

The exhibition comes complete with a fascinating video installation by Studio Azzurro, which helps the viewers immerse themselves in the sunny atmosphere of the countries the three reconstructed monuments are from: Syria and Iraq. The eyes of the people met and filmed in those lands, from being the custodians of a shared memory, have now turned into the astonished witnesses of its destruction.

Media partner of the exhibition is Sky ARTE HD, who will create a documentary about the project to share it with the rest of the world. 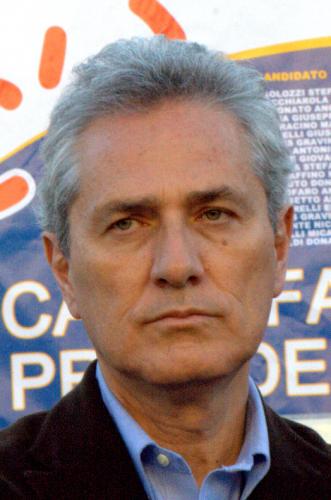