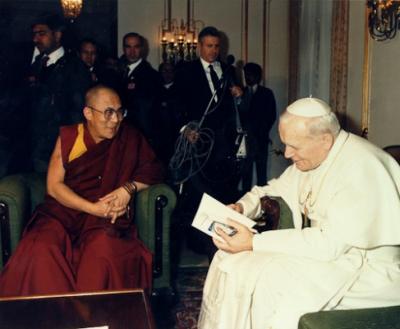 ROME -- Pope Francis declined to invite the Dalai Lama to a religious summit in Assisi, in what critics said was an attempt to curry favour with China, where delicate negotiations were under way over the future of the Catholic Church in the world’s most populous nation.

The Dalai Lama’s secretary, Tenzin Taklha, told the Catholic news agency AsiaNews that the Tibetan religious leader did not attend the summit at Assisi on Sept. 20 as he had not received an invitation.

The Dalai Lama, Tenzin Gyatso, had been present in the birthplace of St Francis 30 years ago when Pope John Paul II inaugurated a series of ecumenical prayers for peace with some of the world’s most influential spiritual leaders.

This year the gathering was attended by around 500 leaders, including the Archbishop of Canterbury and representatives of Islam and Judaism. The leader of Tibetan Buddhism’s 15 million followers – renowned for his philosophy of non-violence -- was not be present.

Pope Francis refused to meet the Dalai Lama when he attended a meeting of Nobel Peace Prize winners in Rome in December 2014 and was accused at the time of seeking to placate China, which sees the Tibetan leader as a dangerous separatist.

The Dalai Lama went into exile in India in 1959 after Chinese troops crushed an uprising in Tibet. He remains one of the world’s best-known advocates for peace and inter-religious dialogue.

“The absence of an invitation to Assisi seems to legitimise the doubts from that time,” wrote journalist Raimondo Bultrini, an expert on Tibet, pointing out the contradiction with Pope Francis’ reputation as a free spirit and an enthusiastic promoter of ecumenical dialogue.

The Vatican has been engaged in sensitive negotiations to establish diplomatic relations with China and bring an end to the persecution of the underground church loyal only to Rome.

Cardinal Joseph Zen Ze-kiun, the emeritus bishop of Hong Kong, expressed unease over the talks and opposition to an accommodation with the government-controlled Chinese Patriotic Catholic Association (CPCA), some of whose government-appointed bishops are said to have children and concubines.

Cardinal Zen has said the Pope was being badly advised and Chinese Catholics should be free to follow their own consciences in the event the Vatican invited them to embrace the Patriotic Association “and join a church totally subservient to an atheist government.”

CPCA was formed in 1957, six years after China broke off diplomatic relations with the Vatican. Today half of China’s estimated 9 million Catholics are believed to belong to the CPCA, which insists on appointing its own bishops and priests, while the other half maintain allegiance to the Pope and worship in secret in a prevalently underground church.

In an article published in July Cardinal Zen wondered whether a totalitarian government could “accept a religion which claims its own supreme internal authority? Can a religion submit itself to the complete control of an atheist government?”

The 86-year-old cardinal said Cardinal Pietro Parolin, the Vatican secretary of state, and his Curia advisers were naïve to think that the prospects were promising for a fruitful dialogue with the Chinese regime.

Pope Francis is “a great believer in the power of love and mercy,” another China expert told the online publication Quartz. “Sometimes this works. It works maybe with Cuba. Maybe with the Russian Patriarch. But with China, I do not think it works: They do not let themselves be conquered by love; rather, if you bring love to the table, they just despise you. They certainly do not open doors for you,” the source, an unnamed priest based in Milan, said.

Sister Beatrice Leung, a scholar on the Chinese Catholic Church from Taiwan, told Quartz she was fearful of the consequences of an unsatisfactory agreement. “I think that nobody in the Vatican understands Chinese politics. If there is an accord on bad terms, I can only hope that the Chinese Catholics will not lose the faith.”

AsiaNews recently reported a Vatican-approved Chinese bishop, Peter Shao Zhumin, had been arrested and taken “on a trip” to northwest China to prevent him from taking possession of the vacant diocese of Wenzhou.

His predecessor, Bishop Vincent Zhu Weifang, spent 16 years in a labour camp during the Cultural Revolution and was imprisoned again between 1982 and 1988. Local police restricted the number of people at Bishop Zhu’s funeral on September 13 to 400 and said participants had to obtain a special permit to attend.

A Vatican spokesman said the Holy See had not been responsible for the Assisi invitations, which had been handled by the Community of St Egidio, a Catholic charity.

A spokesman for the charity said the Dalai Lama had not been invited since the Community of St Egidio had not had dealings with him since taking over organisation of the prayer initiative from Pope John Paul II. “Representatives of millions of Buddhists from Japan and Cambodia will be with us in Assisi,” the spokesman said.