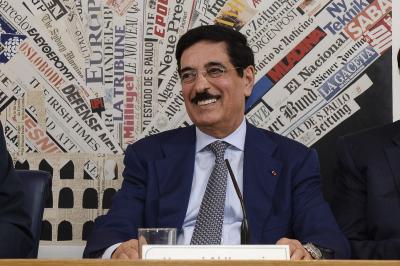 ROME -- Qatar’s candidate for the position of Director-General of UN Educational, Scientific and Cultural Organization, Hamad Bin Abdulaziz Al Kawari, tactically launched his candidature in the The Eternal City, outlining his leadership aims in a press conference.

In his opening address to the media at the capital's Foreign Press Association, Monday, Al Kawari said that for him “Italy represents a true museum for the history and art of the world. The whole world looks to Italy for this. And it is due to this that I have chosen to announce my candidature to your country. The Italian government has made a choice that I consider a very wise one -- to allocate the same resources to security as it does to culture," looking to gain support in his candidacy from the Italian government, who would surely welcome extra investment from the energy-rich Gulf state.

The candidate hoping to succeed Irina Bokova outlined how, for him, “defending cultural objects is one of the biggest tasks for the Director-General of UNESCO,” hence his visit to Italy, the country that also contains the biggest number of UNESCO world heritage sites.

Prior to the conference, on Monday morning, Al Kawari was presented with an honorary degree from the University of Tor Vergata in Rome, where he gave a lecture about the role of education and culture in international relations. Then after the conference, the hopeful candidate met with the Italian Minister of Education, Academia and Research, Stefania Giannini. He has been attending other important meetings with Rome's educational and cultural cirlces, Tuesday.

“My whole life has been dedicated to education and the preservation of cultural assets,” continued Qatar’s candidate, who is a diplomat, intellectual and statesman. “I am a son of the world. My interest lies in all cultures, not in one particular one over all others,” said Al Kawari who has lived and worked in many European countries as well as the US for 10 years, after according Italy his highest praises.

For this candiate from Qatar, who reminded the conference that his home country had previously donated dlrs 10 million to UNESCO, an organisation which he said is still undergoing a financial crisis, “UNESCO’s objectives are extremely noble ones -- the world needs these aims,” but at the same time he stated that the organisation’s "future administration will have to be creative in order to find funds to resolve this financial crisis.” Al Kawari did not specify what he envisaged these to be.