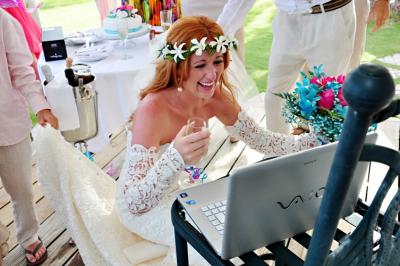 ROME -- Judges at the Supreme Court have ruled that international couples will be able to marry over the Internet, through video conference programs like Skype or Google Hangouts, so long as this is also allowed in the nation state of the foreign spouse.

The Court has made clear that, if this type of marriage is legal in other jurisdictions since it suitably allows for both spouses to express their consent, it cannot be at odds with Italian law just because it is not provided for by the legal order.

In Italy, it was previously the case that no one could marry via Skype or any other video calling application. The only long-distance option, marriage by proxy, was available on special grounds, to soldiers serving abroad or foreigners who due to serious reasons want to be married under Italian jurisdiction.

Each marriage would then be considered on a case by case basis, and be declared void if the court refused to authorise it.

Such a marriage might have been authorised, for example, if the bride was unable to leave their country of residence because they would otherwise lose rights to permanent citizenship.

With the Court of Cassation’s new law now authorising online marriage, at least one of the two spouses must be foreign. The marriage must then abide by the laws of the foreign spouse’s legislation, which must in turn expressly allow for online marriage.

In June, the Supreme Court rejected a request by the Ministry of the Interior to declare the marriage between a citizen of Pakistan and an Italian illegitimate. Neither spouse had been present at the wedding, but both had expressed their consent online.