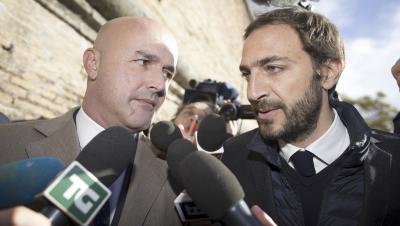 Gianluigi Nuzzi, left, and Emiliano Fittipaldi, right, were acquitted in the trial

VATICAN CITY -- Given how hard Pope Francis’ predecessor Benedict XVI tried to give greater transparency to the inner workings of the Vatican, the way its latest court trial has proceeded will seem odd to many. Dubbed ‘VatiLeaks 2’, the court saw the conviction of Francesca Immacolata Chaouqui and priest Lucio Angel Vallejo Balda for divulging confidential information about the Vatican to journalists. Their sentences — 10 and 18 months, respectively.

Although the acquittal of Emiliano Fittipaldi and Gianluigi Nizzi, journalists and authors of the now-bestselling ‘Avarizia’ and ‘Via Crucis’, shows that rule of law does still prevail here, their very prosecution displays just how backward a turn the Vatican has taken. After all, under the Vatican judicial system, does divine right not also mean freedom of thought and freedom of expression? Did Pope Francis himself not appoint, upon his ascension to power, a commission that would expose the Vatican’s financial dealings?

Certainly, such an emphasis on freedom of information can go too far, particularly if the information revealed is kept confidential for security reasons, as has been the case with some of WikiLeaks’ information in the past. In this trial, however, the stakes are rather different. Granted, the obtaining and leaking of private documents is by no means legal, but do the ends not justify the means when such means reveal, for example, that almost half a million euros originally destined for charity have made their way into the marble flooring of one cardinal’s apartment?

If there is one thing that the ‘VatiLeaks 2’ trial has revealed, besides embarrassing levels of corruption that make MPs in the UK seem saintly in comparison, it is that more transparency is required in the Vatican. An opportunity to achieve this presented itself in the form of the trial but fell short, with those who revealed the information being condemned, and not celebrated.

In the future, we should hope that what has come to be known about the Vatican in the last few days will reignite the effort for greater visibility started by Benedict. But for now, in the words of Juvenal, the great satirist of ancient Rome, “who will guard the guards?”