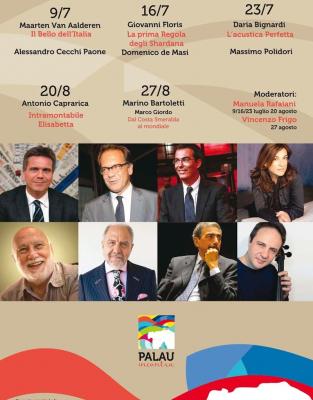 PALAU -- Italy, with its beauties and traditions: five summer weekends will be dedicated to a virtual trip into the “Belpaese” and, in particular, into the wonderful, ancient island that is Sardinia with prominent personalities of Italian culture, journalism and sport will guide visitors on this imaginary trip.

Palau, a gem of Northern Sardinia, has been chosen as the ideal location for this festival due to its notable history – marked by personalities such as Napoleon and Admiral Nelson - along with the spiritual and meditational places that characterise it, among which the Tomba dei Giganti and San Giorgio’s wood, where people historically go for healing purposes.

To relax, reflect and stimulate curiosity will thus be the primary purposes of the PALAU INCONTRA festival, which aims to become a landmark for the guests and inhabitants of Palau and the surrounding area. It was introduced at the premises of the Foreign Press Association in Rome.

The first event, on July 9, tries to understand how the correspondents of leading international newspapers see Italy. With Maarten Van Aalderen, author of the book "The Beauty of Italy" and the TV anchorman Alessandro Cecchi Paone, we will discover that what makes Italy a memorable country can be an ancient monument, a precious artifact or… simply a good plate of spaghetti, enjoyed in a small Roman square.

On July 16, television anchorman Giovanni Floris – in conversation with sociologist Domenico De Masi – will delight and surprise us with a new, dazzling variation of the Italian comedy: the Sardinian “commedia.” Four unforgettable characters are at the center of this plot full of twists, with the background of a Sardinia beyond any cliché.

On July 23, we will explore the remarkable parallel between love, music and narrative thanks to the new novel written by journalist Daria Bignardi, “L’Acustica Perfetta”. This presentation will be accompanied by the music of Massimo Polidori, the main cellist of Milan’s “La Scala”.

On August 20 Antonio Caprarica will virtually move us to another famous island for a few hours, as he will unveil the loves, intrigues and secrets of "Timeless Elizabeth,” the Queen of England.

According to her detractors, the Queen is only gifted with the virtue of longevity. Her supporters, on the other hand, regard her as the symbol of the nation, whilst for the media, she is a global icon. But who really is Elizabeth Alexandra Mary Windsor?

On August 27 sports journalist and TV host Marino Bartoletti will join the festival with a question: “Italiani… Un popolo di Sportivi?” (i.e. “Italy... a sporting nation?”). With irony and refined wit, Bartoletti will help us to understand that sport is not mere physical activity, but it is also history, a means of education, a unifying tool, a way to increase growth and commitment. Interviewed by Vincenzo Frigo, Bartoletti will explain the stance of Italians in relation to sports.

And what better place to discuss sport than Palau? Indeed, next October, this ancient Sardinian town will host the "Sardinia Kiteboarding Grand Slam” – a test of the kiteboarding world championship – in the bay of Porto Pollo, confirming the role of Palau as the favorite destination for surfers from around the world. 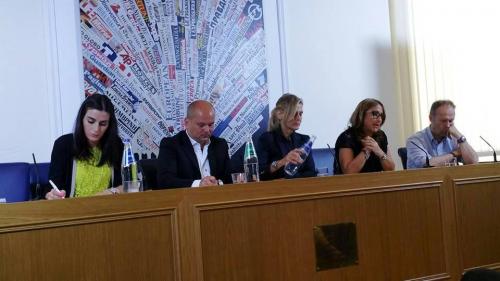