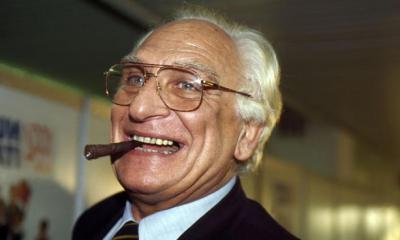 ROME -- Marco Pannella, the radical Italian politician and civil rights campaigner, has died at the age of 86 after numerous health problems in recent years.  Pannella was best known for his pivotal role in the Italian legislation which legalised divorce and abortion, as well as founding Italy’s Radical party in 1955, causing his rise to fame and prominent political position between 1960-90.

Radio Radicale, the radio station linked to his party, announced his death on Thursday, after several days in a Rome hospital.  Italian Prime Minister Matteo Renzi was one of those to take to Twitter to lament the passing of “An extraordinary protagonist of life, not just Italian politics.  He’s transnational, one might add,” alluding to his “Transnational Radical Party,” set up in 1989. The premier has also commented that Pannella was a “lion of freedom.”

Born in Teramo, in Abruzzo, on May 2 1930, he was a believer in Ghandian nonviolence, and as such is known for his frequent hunger strikes, anti-church position, chain-smoking, both left and right party alliances, and sit-ins. Pannella was the kind of politician that is so seldom seen these days. On the international scene, he was a member of the European parliament, as well as friend of the Dalai Lama and a huge fan of Martin Luther King Jr. Despite his anti-Church stance, he had common ground with the Vatican in their efforts to end world hunger and was reported to be fond of Pope Francis.

The pontiff, in fact, sent him a copy of his book on mercy for his birthday and, whilst they shared concern for upholding the rights of prisoners, called Pannella in 2014 to urge him to end a hunger strike that he had begun with the aim of protesting prison conditions.  His hunger strikes frequently brought him close to the edge and it was in the same clinic in which he spent recovery time that he passed away.

Pannella never married and had no children, though he had been living for several decades with girlfriend Mirella Paracchini.  In an interview in 2010, he alluded to the fact that they had an open relationship “without jealousy” and also admitted that he was bisexual and had had several significant relationships with other men.  He was also one of the frontrunning campaigners for gay rights, as well as one of the first promoters and founders of the green and ecologist political movements in Europe.

Other referendums of his included the legalisation of cannabis, during which he smoked a joint in St Peter's Square, the abolition of life imprisonment and hunting, as well as being a leading figure in campaigns such as the end of pure proportional representation in elections in the 1990s and Italy’s decision to abolish nuclear power production in 2011.

Whilst his supporters viewed his changeable allegiances as “post-ideological,” his adversaries considered him opportunistic and cynical – backing Silvio Berlusconi in the elections of the early to mid 90s, but joining the Romano Prodi coalition in 2006.