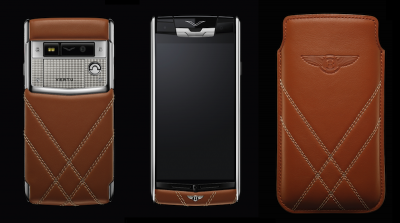 Vertu teamed up with Bentley for a custom range

Rome - Cosa Nostra’s top fugitive has been using British telecommunications technology to avoid interception by the police, turning a device normally associated with the ostentation of the rich into a screen for a discreet life in the shadows.

Matteo Messina Denaro, who has been on the run for 23 years, uses a 4,000 euro mobile phone produced by Vertu, a British manufacturer based in the leafy Hampshire town of Church Crookham and best known for the jewel-encrusted Android phones it sells to the super-rich for prices of up to 200,000 pounds.

Messina Denaro, dubbed Diabolik after an Italian cartoon villain, is less interested in Vertu’s alligator skin sheaths, scratch-resistant sapphire screens or keys trimmed in gold and platinum as in the security of its communications. The mafia boss uses the phone with a customised VOIP (Voice Over Internet Protocol) software that he has been assured could not be intercepted. The claim emerged recently in the testimony of Giuseppe Tuzzolino, an architect suspected of connecting the mafia boss with Sicilian politicians and freemasons. Mr Tuzzolino was arrested in 2013 and was placed under police protection after turning state’s witness.

Messina Denaro and an associate “use a cellphone called Vertu, which costs around 4,000 euros and, according to SIO technicians who recommended it, cannot be intercepted after you have installed a particular programme they themselves designed,” Mr Tuzzolino told magistrates in testimony published by the newspaper Il Fatto Quotidiano. SIO stands for Secure Identity Object, a system for storing and transporting digital identity information, but it is also the name of a company in northern Italy that assists the police in tracking suspected criminals. Jon Stanley, a spokesman for Vertu, was ambivalent about Messina Denaro’s endorsement. “I can’t comment on why any customer would use a Vertu phone,” he said. “Security encryption is something every manufacturer is working on these days. For most of our customers security of data is more relevant than ever.”

Mr Stanley said Vertu had not been contacted by the Italian police but would cooperate with the appropriate justice authorities if required.

Apple, the American smartphone manufacturer, recently resisted legal efforts by the FBI to force it to unlock the iPhone used by an Islamist terrorist who shot dead 14 people in the California town of San Bernardino last December.

The FBI got round Apple’s opposition by hiring a hacker to break into the confiscated phone. In contrast, Facebook agreed to cooperate with investigators from Palermo after it emerged that Mr Messina Denaro and his sister, Anna  Patrizia, were using fake identities on the social networking website to communicate with one another. The boss with a playboy reputation has managed to keep one step ahead of the law thanks to the loyalty of his followers in Castelvetrano, his home town in western Sicily, and his own circumspection. In recent years mafia bosses have taken the precaution of talking while walking in the open countryside, after discovering that police had planted bugs underground and in a tree to try and capture their open-air conversations. “We believe Matteo Messina Denaro has travelled a lot during his years on the run,” Teresa Principato, a Palermo prosecutor who has been coordinating the hunt for him, said last month. “Someone has lent him their identity, allowing him to live their life.”

Ms Principato said the mobster had enjoyed the protection of the mafia, freemasonry and a “complicit professional bourgeoisie.” Vertu’s Hong Kong-based owners have reportedly been working on a secure smartphone operating system that encrypts data and wipes it when a phone is lost or stolen, a feature as appealing to mafia bosses as to legitimate entrepreneurs.

Vertu’s uninterceptable communications represent a distinct improvement on Cosa Nostra’s traditional pizzini, messages written on scraps of paper and delivered to their destination by hand.