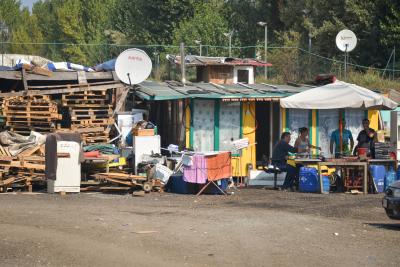 A Roma camp in the Italian capital

ROME -- Behind a former service station on Via Casilina, a dusty path leads to a vast prairie. Along the path, a 6 feet-high wall of car wrecks shields the prairie from the neighbourhood while in the distance looms Rome’s disused city airport.

These 120 hectares once hosted “Casilino 700”, Europe’s largest camp. “Casilino 700” arose in the early 1960s when southern Italians migrated to Rome. In 1968, a Roma family from Bosnia joined them. By 1996, the camp was lodging 2,000 persons. When in 2000 the left-wing government razed the camp, its residents moved to the adjacent “Casilino 900”. In 2010, the right-wing government razed “Casilino 900” and transferred its residents to state-built camps.

‘Per sbaraccare, occorre baraccare,’ proclaimed Mussolini in 1933. Rome’s shantytowns and their dwellers have always been at the centre of local politics. Policies typecast the dwellers invariably as “nomadi” (nomads) even when they have been sedentary for generations. And though the camps lodge Roma as well as non-Roma, politicians always refer to the dwellers as “zingari” (gypsies).

The “July 21” organisation, who advocates the rights of Italy’s gypsy population, seizes the opportunity of the upcoming elections: it published a report, “Roma: oltre le baraccopoli” (Rome: beyond the shantytowns), that proposes a solution to Rome’s camps.

Rome’s shantytowns appeared towards the end of Italy’s unification when migrants from Southern Italy improvised shelter in the new capital. Among them were Italian travellers.

In 1957, 15,000 persons were living in 50 camps. By the end of the 1960s, the number of families living in camps had rocketed to 13,684. Rome’s authorities started building council housing and by the early Eighties Rome’s camps had almost disappeared.

Nowadays, in Rome, more than 5,000 persons are living in official camps, 400 in dormitories and 2,500 in small, illegal settlements.

Rome’s official camps lie along or beyond the “GRA”, Rome’s ring road. Each camp is monitored and secured 24/7. Extended families live in campers of 33m2 that are surrounded by litter and vermin. Many residents suffer from hypertension and respiratory difficulties. There have been outbreaks of hepatitis A. The average life expectancy in the camps is 50 years: Europe’s lowest and 20 years less than the Italian average.

Frequent moving between settlements as well as large distances to the nearest school made many children abandon school: only 2,500 of Italy’s 13,000 children of Roma origin attend class regularly.

In June 2014, mayor Ignazio Marino stopped securing and monitoring Rome’s camps. Since then, the official camps have become a no man’s land ruled by the law of the stronger.

Usually, a camp is a temporary phase in a migrant’s trajectory. Rome’s official camps, however, do not perform a transit function. Instead, they have become real termini: the isolated camps offer no opportunities for employment. "Anyone born here has very little contact with the outside world," says Marco Brazzoduro, professor at Rome’s “La Sapienza” university and president of the Romanì federation. "Someone living in a camp has no other horizon and ends up inuring. The camp becomes a total institution, completely self-referential."

Rome’s authorities operate a policy of eradication. Last year, for example, 80 informal settlements have been razed. The authorities dismantle settlements without having sufficient place to lodge its residents. Hence, many residents spread out and build micro settlements. These settlements, however, are not safe.

Many a resident, especially small children, have died of cold or perished in a fire. In 2011, while the parents were looking for food and water, four siblings were carbonised in a shack when the gas cylinder the family used for cooking and heating burst. More than 20 times the family had been evicted and the shack they were living in was to be razed a couple of days later. Then-mayor Alemanno, visiting the spot and addressing the media, asked the Italian government authorisation to raze informal settlements and build more official camps.

Mid 2014, “July 21” revealed that sheltering 6,000 people in eight derelict and overcrowded camps cost the city of Rome as much as 24 million euros a year.  In all 35 companies had obtained contracts without passing any official tender. Most of the money went to monitoring and security and only 0.4 percent to social inclusion of the camp residents.

Half a year later exploded the “Mafia Capitale” scandal: Roman politicians were earning fortunes with sheltering immigrants and gypsies. One of the accused, Salvatore Buzzi, boasted: “I earn more money with sheltering immigrants and gypsies than with selling cocaine.” Buzzi’s businesses invoiced 2 million euros a year for maintaining Rome’s official camps.

“Roma: oltre le barracopoli” proposes to close all official camps and dormitories and to dismantle all micro settlements over a period of five years.  One-on-one consultation with the families should yield individual solutions. In particular, no family unit should be disrupted as now is the case in the dormitories.

For the residents of the micro settlements who are willing to return to their home country, the authorities should engage in international cooperation. For the residents of the official camps who originate from former Yugoslavia, the authorities should regularise their citizenship –for years, many residents, some 2nd or even 3rd generation immigrants, have been living in Italy in legal limbo.

Yet, will Rome’s council housing residents accept large gypsy families for a neighbour? When former mayor Ignazio Marino proposed to open council housing to the Roma, he faced fierce resistance. And even if Roma would be offered council housing, will Rome after some time see the emergance of urban gypsy ghettos of the kind common in Sofia, Belgrade and other cities in Eastern Europe?

Behind the former service station on Via Casilina, clothes are drying on a washing line. Two Roma families from the “Via di Salone” camp, the official camp the authorities deported them to when they razed “Casilino 900”, have settled in the building. Further down the path stand several tents. In the area where Gianni Alemanno in 2010 called the razing of “Casilino 900” a ‘historical day’ on which he ‘wiped out Rome’s shame’, every day new settlers arrive. The neighbourhood protests; two council representatives have asked for an inspection of the area for “illegal constructions.”