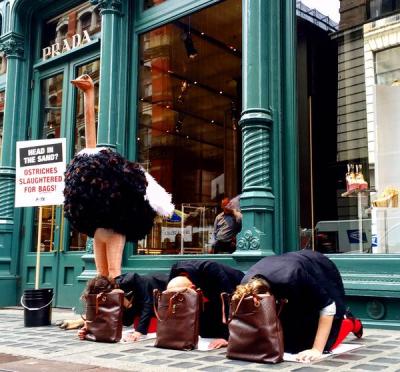 Protestors in New York ask "Whose head is in the sand?"

ROME -- Following an investigation that revealed that ostriches are killed with electric shocks at the age of one, slaughtered to make ‘luxury’ ostrich leather hangbags, PETA USA have become a shareholder in high fashion label Prada.  This action will allow the animal welfare charity group to attend the Prada annual meeting and officially ask the company to finally end the sale of leather products made from exotic animals.

“Every ‘goose-skin’ Prada handbag means that a young ostrich was hung upside down, killed and plucked in a miserable and terrifying slaughter,” said PETA Director Mimi Bekhechi.  “PETA USA is leading the fight against cruelty in the PRADA meeting rooms, where we will ask the company to eliminate ostrich leather handbags once and for all.”

Part of PETA’s motto states that, “animals are not ours to wear,” and they emphasise this point with a video released that shows footage from the inside of one of the biggest ostrich slaughterhouses in the world.  Young ostriches are kept in a barren fenced in enclosure until they are loaded onto trucks to be taken to slaughter at the age of just one.  At the slaughterhouse they are then hung upside down after a shock from an electric stun gun, after which they are killed and plucked to create the surface of “nodes” used for the Prada handbags.

Hermes is another company in the firing line for their use of ostrich leather for bags.  The controversy has sparked protests around the globe. 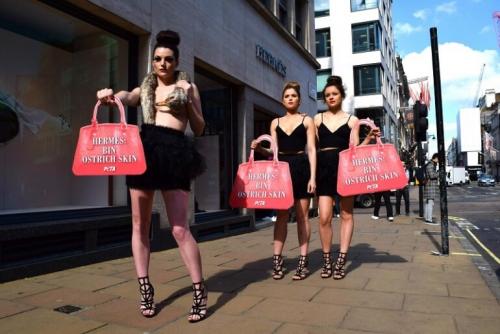